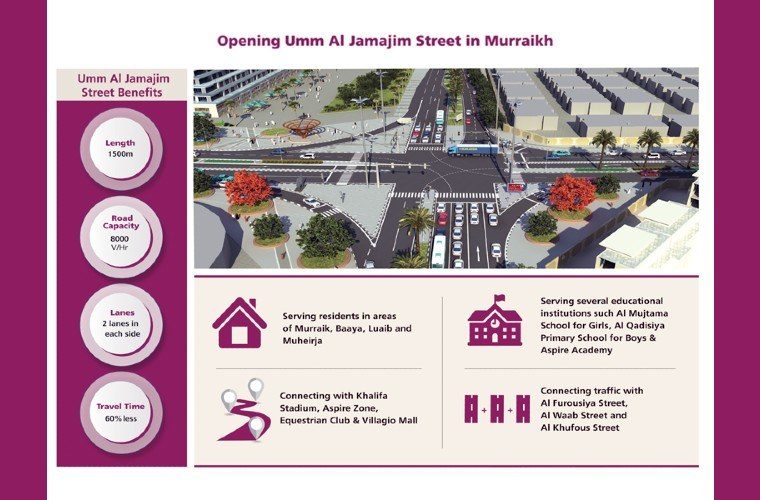 The Public Works Authority Ashghal has announced the opening of Umm Al Jamajim Street in Murraikh to traffic to provide a direct movement between the Furousiya Street and Al Waab Street through Al Khufoos Street.

Umm Al Jamajim Street will enhance traffic in the area after its huge development. The street, which consisted of a lane in each direction, has been revamped into a two-lane road in each direction to accommodate about 8,000 vehicles per hour, reducing traffic time to more than 60%.

As part of Ashghal's efforts to pursue traffic safety, a median has been established to separates the two directions of the traffic, along with service roads. Pedestrian and cycle paths are being completed on both sides of the road.

"The opening at this time coincides with the start of the new academic year to serve many educational institutions, schools and kindergartens in the area", Darwish said. "The street will create better traffic connection for businesses as well such as Villagio Mall and sport facilities like Aspire Zone; and while the kickoff of Doha 2019 World Athletics Championships is becoming soon in September ", he added.

Umm Al Jamajim Street serves the areas of Baaya, Muheirja and Murraikh and provides easy access to Al Waab and the Furousiya Streets.

To complete the upgrading works of the surrounding streets, the Public Works Authority will close Al Baaya Street for 45 days on Sunday 8 August. Meanwhile, travelers can use the parallel Al Kharrara Street.