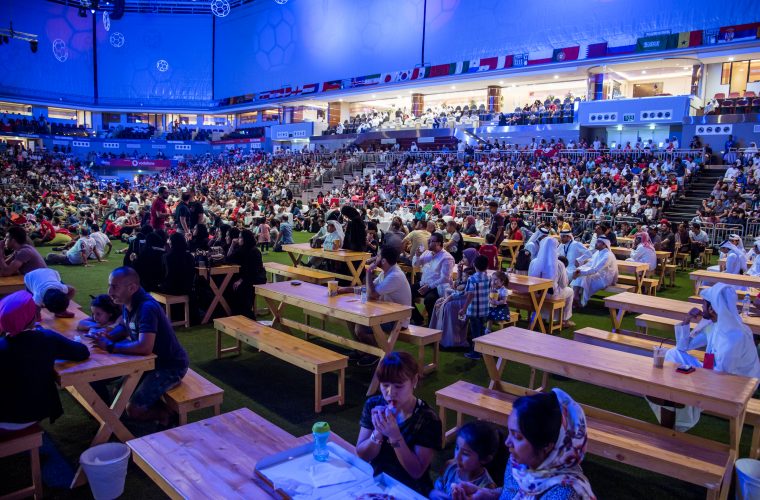 Starting 1 July, the Qatar Fan Zone at the Ali Bin Hamad Al Attiyah Arena will open its doors to the public at 4pm and close at midnight. The Qatar Fan Zone’s new opening times accommodate the different match schedules for the last two weeks of the World Cup 2018 and will only be open on the days when matches are being played.

Today, the Qatar Fan Zone will open with an interactive show by female Brazilian football free-styler, Raquel Bennett at 4pm. This will be followed by a fluorescent performance by an LED drummer troupe before the live screening of the match at 5PM.

The Qatar Fan Zone already welcomed over 43,963 visitors since doors open at the Arena, with fans benefiting from the Fan Zone’s unique ability to show two matches at the same time thanks to its dual screens. Matches featuring the Arab nations recorded the highest number of visitors, and football fans added music enthusiasts to their rank as they enjoyed live music performances by Moroccan star Hatim Ammor and world-renowned Rai icon Cheb Khaled.

More free concerts are scheduled and will take place in the quarter-finals stage of the biggest sporting event of the year and will feature Iraqi singer Mohammed Al Fares on Friday 6 July, Lebanese artist Ziad Bourji on July 7, both at 7:30 PM; Kuwaiti star Essa Almarzoug on July 10 at 7:30 PM, and compatriot star Ibrahim Dashti on July 10 at 7:30 PM

The Qatar Fan Zone is part of this year’s Qatar Summer Festival, which kicked off on the first day of Eid Al-Fitr. Organised by the Qatar Tourism Authority, the 11-week festival is a nationwide celebration of the country’s diverse retail and hospitality offerings, complemented by a host of entertainment and sports activities.

Have you been to the Qatar Fan Zone? Have you experienced a live match on the big screen at Ali Bin Hamad Al Attiyah Arena? Do let us know what you think in our comments section. Like and share the article - it keeps us going.