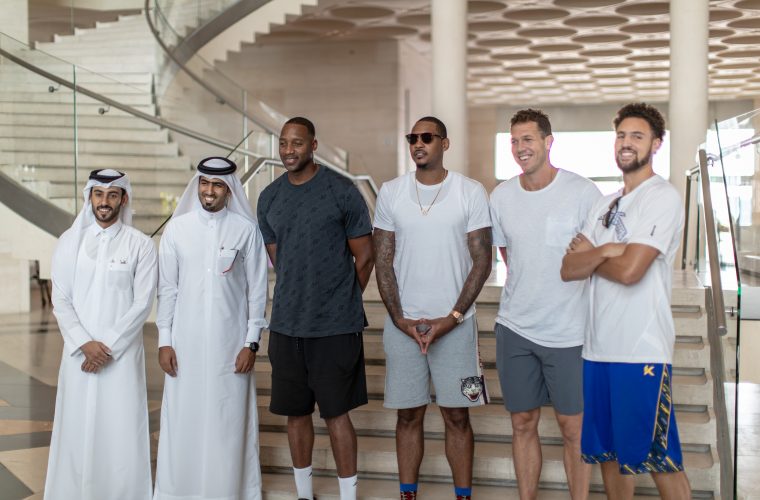 As part of their visit to Qatar, USA’s National Basketball Association (NBA) stars Carmelo Anthony, Klay Thompson, Tracy McGrady and Luke Walton visited the Museum of Islamic Art (MIA) for a tour of its exhibitions.

The four players were given a tour that highlighted the world-class collections housed at the museum, which include metalwork, ceramics, jewelry, woodwork, textiles, coins and glass. As part of the tour, the players were given a brief introduction to Islamic art, covering its history across three continents since the 7th century AD.

Prior to the tour, the players had lunch at IDAM, the award-winning, Michelin-starred restaurant created by chef Alain Ducasse. There, the players met with Qatari influencers and regional sports icons including Mohamed Saadoun, Mutaz Barshim and Mohammed Abutrika.

Commenting on the visit, Khalid Al Ibrahim, Chief Strategic Planning Officer at Qatar Museums, stated: “The Museum of Islamic Art is the flagship of Qatar Museums and tells the fascinating story of the Islamic world, with all its richness and beauty. It comes as no surprise that it has become a must see stop for all international visitors. We were pleased to welcome our guests at the museum and look forward to hosting them again in the future.”

The NBA superstars are currently visiting Qatar at the invitation of the World Cup organizing “Supreme Committee for Delivery and Legacy”. Its Secretary General, Hassan Althawadi said on Saturday: “We’ve always wanted the world cup in Qatar to be about bringing people and cultures together. Today the NBA players have seen first-hand what thousands of sports fans will see when they come in 2022, that Qatar has so much to offer; from state of the art stadia to rich culture and amazing museums like the MIA”.

Carmelo Anthony is the United States Olympic men's national basketball team all-time leading scorer and a leader in rebounds and games played. Klay Thompson is a four-time NBA All-Star, a two-time All-NBA Third Team honoree, and a three-time NBA champion. Before retiring in 2013, Tracy McGrady was a seven-time NBA All-Star, seven-time All-NBA selection, two-time NBA scoring champion, and one-time winner of the NBA Most Improved Player Award. Currently serving as the head coach for the Los Angeles Lakers, Luke Walton had previously played 10 seasons in the NBA as a forward and won two NBA championships with the Lakers.

“We had a tour of the beautiful Museum of Islamic Art, which was amazing. It was great to be shown the richness of the art in the museum. I hope to return on my next visit to Qatar and spend more time viewing its incredible collection,” said Tracy McGray.

“This is my first time in Doha and will definitely not be my last,” said Carmelo Anthony. “From incredible sites such as the Museum of Islamic Arts to deep conversations with regional sports stars, I have enjoyed learning about this country and its story. I look forward to coming back here with my family.”

Designed by world-renowned architect I M Pei, the MIA has become an iconic monument representing Qatar Museums’ commitment to transforming the country into the cultural capital of the Middle East. To mark its 10th Anniversary this upcoming November, the museum will host Syria Matters, a major exhibition documenting the extraordinary cultural heritage of Syria, illuminating the country’s key role in the artistic and intellectual history of the world.