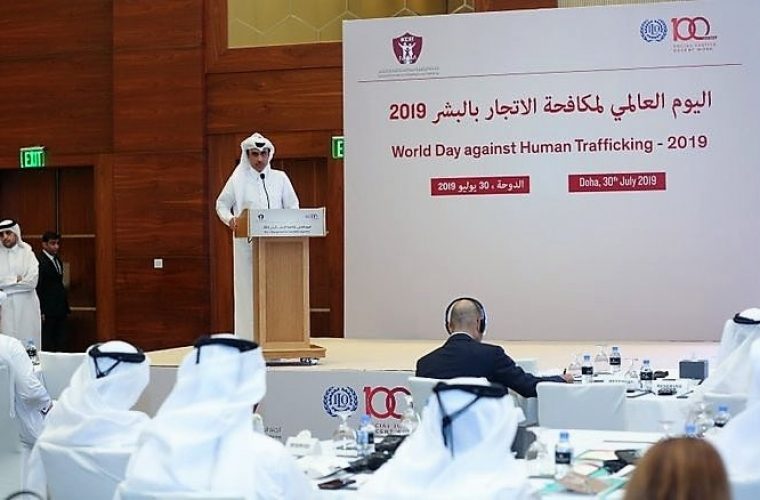 The National Committee for Combatting Human Trafficking marked the World Day Against Trafficking in Persons which falls on July 30 each year, by organising a workshop to bring together the various parties committed to eradicating trafficking and forced labour in cooperation with the International Labour Organisation (ILO).

The committee also honoured the top four winners of 65 competitors in the "We Are All Born Free" competition, organised in cooperation with Qatar University to educate students on human trafficking issues.

The workshop, in two panel discussions, focused on informing members of the National Committee for Combating Human Trafficking and other stakeholders about the latest developments in combating trafficking and forced labour in Qatar.

Including the opening of shelters, and the identification of concrete measures through which cooperation between bodies in Qatar and across borders can be enhanced in areas of prevention, protection and prosecution in order to redouble efforts to address this global phenomenon.

Mohammed Hassan Al Obaidli, Secretary of the National Committee for Combating Human Trafficking , said that the State of Qatar has paid great attention to combating the crime of human trafficking, where it has spared no effort in establishing the national legal and institutional framework and supporting national, regional and international efforts to combat the phenomenon of trafficking in persons and related phenomena such as forced labour, modern slavery and child labour.

Al-Obaidli added that at the institutional level, the State has established the National Committee for Combating Human Trafficking to unify the efforts of the State's institutions and civil society in dealing with cases that are discovered.

The committee aims to develop a national plan to combat human trafficking and to follow up on its implementation as well as developing programs for the care and rehabilitation of victims of trafficking to help them quickly integrate into society, he said , noting that the State of Qatar had acceded to several international conventions, treaties and covenants that prohibit such crimes, including: the International Convention against Slavery in 1926 and the conventions on forced labour in 1930, as well as regional and international declarations, conventions and treaties on human rights, the rights of the child and the rights of women and the United Nations Convention against Transnational Organised Crime in 2000, and the two Protocols to Prevent, Suppress and Combat Trafficking in Persons, Especially Women and Children, as well as the smuggling of migrants by land, sea and air.

The Secretary of the National the National Committee for Combating Human Trafficking said that all these efforts come within the framework of Qatar's firm policy to promote and protect human rights and preserve human dignity and recognising the moral and legal obligations of the State as an active member of the international community.

He stressed that trafficking in human beings was a serious crime and constituted a grave violation of fundamental human rights in freedom, security, personal dignity and in contravention of human values, which the international community is keen to combat through international conventions and national legislation and the rules and practices necessary to prohibit and punish those who violate them.