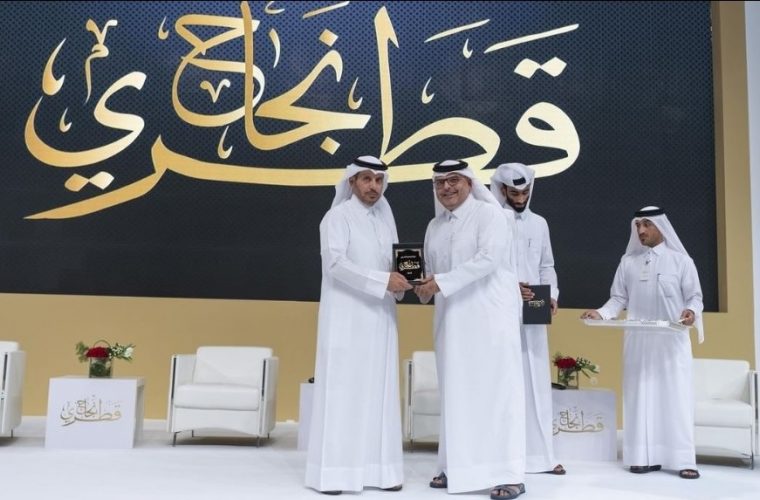 A number of officials in the country reviewed the highlights and successes achieved by various sectors as well as their personal experiences during the first meeting of the "Najah Qatari Festival" yesterday evening, at the Doha Exhibition and Convention Centre.

Each participant gave a glimpse of his biography, the most important stages he went through, the scientific and academic formations and the training courses that they received during their careers and how this reflected on the success of the institutions to which they belong, stressing in their conversations to youth the need to exert effort, patience, perseverance and a spirit of challenge and armament love of the country as the most important ingredients of success in various projects.

H.E. Ahmed bin Mohammed Al Sayed, Minister of State and Chairman of the Free Zones Authority highlighted the future role of the Authority in economic development and attracting foreign investments in cooperation with the private sector and Qatari entrepreneurs to enter into partnerships with global economic institutions and companies in the free zones that would be established , where the Authority had received numerous requests for joint ventures in the private and government free zones, as well as entrepreneurs, noting that the Authority is seeking to bring technology companies of various sectors and their presence in those areas and is currently in negotiations to reach specific projects in this sector.

H.E. Issa bin Hilal Al Kuwari, President of Qatar General Electricity and Water Corporation (KAHRAMAA), stressed that the success of the Corporation in providing its services is due to the continuous development and follow-up of all that is new in the world in this area with flexibility in dealing with future plans. He added that KAHRAMAA had faced many challenges, most notably with regard to the water sector and to develop a strategy to provide water security for the State and has already completed a large part of its plans in this regard.

He said that the second challenge related to the extension of electricity and water networks to various development projects witnessed by the state, the Foundation has succeeded in this direction as well, and highlighted that the KAHRAMAA had contracted with an international company to upgrade the level of services provided to subscribers and part of it is related to the application of prepaid meters system as well as remote reading.

H.E. President of Ashghal Dr. Saad bin Ahmed Al Mohannadi articulated about the most important scientific and practical stations in his career, stressing the importance of self-development and attention to courses that develop various skills for the success of any leader.

H.E. Al Mohannadi pointed out that the most important pillars of Qatar National Vision in this sector are the construction of high-quality projects and excellent management. He explained that Ashghal is working on the Doha beautification project, which reflects the desire of visitors to return to visit Doha, in addition to recycling some materials. He pointed out that among the most important new projects is the smart city project.

CEO of Aspire Zone Foundation Mohammed Khalifa Al Suwaidi tackled the Foundation's continuous progress and achievements through taking care of the youth and the younger generation, discovering young talent, refining their talents and transforming them into outstanding athletes who achieve great achievements for them and Qatar. He announced that Aspire will witness during the coming period the launch of the sports business district to include the headquarters of various companies operating in the field of sports.

CEO of the Media City Mohammed Bader Al Sada talked about his experience in the media field in several institutions. He also touched on the establishment of the Media City and its importance to Qatar. He discussed how to achieve Qatar National Vision through the Media City that supports the knowledge economy.

Al Sada stressed that thanks to the continuous efforts since 2017, many memorandums of understanding have been signed with international media organisations that will have offices in the Media City in Qatar.

Najah Qatari festival, which is sponsored by many government institutions, aims to showcase the most successful Qatari experiences of influential and distinguished people. It also allows the public to meet officials and through the organisation of dialogue meetings that will be attended by several ministers, general directors, and heads of various departments such as defense, economy, culture, arts, sports and more.

The five-day festival will include 13 forums that will cover various fields, including defense, economy, culture, arts, sports, and others. The third edition of the festival will be accompanied by an exhibition of the most prominent and successful Qatari projects. The festival witnesses the allocation of places for Qatari youth projects as well as various activities associated with the forums.