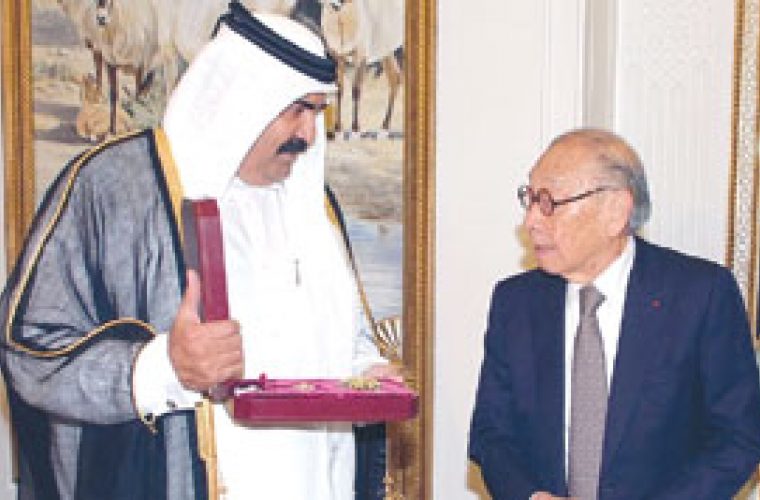 ONE of the most moving moments at the Museum of Islamic Art on the day of the Grand Opening was the sight of the dignified but frail figure of one of the greatest architects of the last century, I M Pei, walking slowly into the building to face the world’s press and its ranks of cameras. Walking cane held firmly in hand, Pei is 92, but brushes aside any offers of assistance. Later the same day, before the building was inaugurated by HH the Emir Sheikh Hamad bin Khalifa al-Thani and HH Sheikha Mozah Nasser al-Misnad, he ascended the steps of the podium alone to deliver a short but moving speech in which he said modestly that having the opportunity to design the museum had given him a great opportunity to learn about other cultures.

Hiroshi Okamoto Pei had searched the Muslim world for inspiration before deciding on the final design for the museum. The limestone-clad building on its purpose-built island rises from a square to an octagon to a circle, culminating in a dome concealed within a cube. Rotated planes manipulate the strong sunlight, creating a subtle pattern of light and shadow. Reflected in the water that surrounds it, the building breaks up into an inky scribble that echoes the flowing Arabic script on the centuries-old documents in its showcases. Inside, the Islamic decoration is more elaborate, with a huge circular perforated chandelier reminiscent of some of the elaborate metalwork on display. Overseeing from the outset the task of design and construction of this immense building has been the project architect Hiroshi Okamoto, sometimes locally referred to as ‘Mr Pei’s right-hand man.’ He was born in Japan in 1968 but studied architecture in the USA, and has worked with I M Pei for the past eight years. Gulf Times talked to him to find out what the completion of this immense project meant to him personally. Okamoto explained that he’d been coming and going between New York and Doha for around six years but was based here during the height of construction for the better part of two or three years. “Mr Pei himself came once or twice a year, and sometimes we met in Europe, as it’s half-way. He always came here for major presentations.” Asked how he felt on such an important day, Okamoto responded, “I’m very happy of course, but also I feel very relieved to see it completed, because it was such an enormous endeavour. To see the museum with people walking around in it today – there were times during the struggle when I sometimes thought it would never happen. It’s gratifying to see how the building is being received. Personally I feel very good about it, but it’s good to know that other people do as well. It really washes away any negative memories of difficult times during the construction.” Among the challenges Okamoto and the design team faced was the evolution of a concrete mix that would withstand the extreme climatic conditions of Qatar. There are 9,000 cu m of cast-in-place architectural concrete used in the construction, whose forms are visible throughout the atrium and public places. While based in Doha Okamoto travelled throughout Europe, Japan and Arabia to inspect the production for the building of cut stone, structural steel, ornamental metalwork, glass work and speciality elevators. But every project has its problems, said Okamoto, and he saw the successful completion of the project as a testimony to everyone else involved in it. He paid warm tribute to the Turkish construction company Baytur, responsible for building the museum and currently working on the new Convention Centre in Doha. “Of course, it was a steep learning curve for them,” he commented. “Our practice has the highest standards of architecture wherever we are. But they were more than willing to learn and made a great effort, and it’s a testimony to Baytur as well that this building is here today.” Commenting on the unique design of this monumental building, with its stark exterior and its interior which features more decorative details, Okamoto explained that Pei wanted to expand the interior space through complexity. “It is more ornamented than anything you would normally expect from him.” The outside makes use of sunlight and shadow, the interior reflects the superb craftsmanship of the many precious objects housed there, resulting in a satisfying blend of the essential features of Islamic architecture over the centuries. Although the Museum of Islamic Art is now completed, Okamoto will not bid farewell to Doha just yet, as he has recently been recruited as a consulting member of the Phase 2 development of the Museum Park. http://gulf-times.com/site/topics/article.asp?cu_no=2&item_no=256508&version=1&template_id=36&parent_id=16