Motorists ‘must carry’ licence while driving 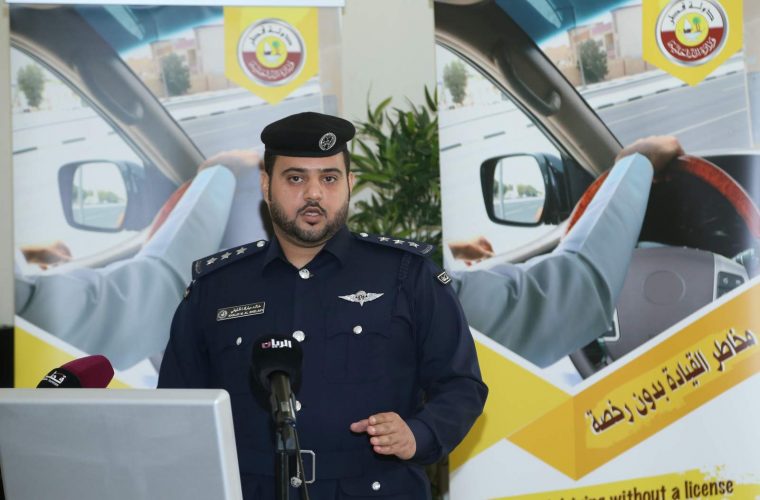 The ongoing traffic awareness campaign titled “Accident-free summer” entered into its fourth week with focus on raising awareness against driving vehicles without a license. Earlier the campaign highlighted common traffic violations that included stopping in the yellow box, using mobile phone while driving and negligence of wearing seatbelts.

The campaign this week highlights the dangers of "driving without a license" because of its risk to road users, pedestrians and passengers.

Capt. Khalid Mubarak Al Khulaifi, Head of Traffic at Dukhan told that the Article 29 of the Traffic Law for the Year 2007 stipulates that no motor vehicle shall be driven on the road unless the driver has obtained a driving license from the Licensing Authority entitling the holder to drive such a vehicle.

Persons belonging to any of the following categories are exempted from these provisions:

1. Holders of driving licenses issued by the armed forces, police and other security agencies for driving these agencies’ vehicles only. 2. Citizens of the Gulf Cooperation Community states holding valid driving licenses issued by the competent authorities of their respective States, 3. Visitors and tourists holding non-Qatari valid driving licenses and who undertake to submit such licenses to the Licensing Authority within fifteen days from the date of entry to the country, to be held for the period in which they are allowed to stay in the country or a period specified by the Licensing Authority. 4. Visitors and tourists holding valid international driving licenses.

He added that the Law also criminalizes letting a person without driving license to drive a car.

Capt. Khalid Mubarak Al Khulaifi said that the traffic patrols continue their campaigns on a daily basis, to confirm the avoidance of this violation, where it shows no tolerance because of its severe risks. He said that during the first half of the year 2018 a total of 143 violations of driving without license were recorded.

He also noted that a person holding a license for any of light, heavy or equipment vehicles is not permitted to drive other vehicles.

He pointed out that in the case of juveniles being caught for driving without license, they will be transferred to the Juvenile Police Department to take the necessary measures against him. The patrol and traffic investigation department has been carrying out a two-week campaign for direct stopping campaign, focusing on violation of driving without a license as well as using a mobile phone and not wearing a seat belt.

Speaking on the video being circulated through social networking sites, of a person who drove a car in Al-Waab area, Col. Mohammed Al-Hajri, Director of Traffic Awareness and Information Department said that the General Directorate of Traffic urges all road users, whether in celebrations or weddings, to abide by traffic rules and regulations, and to keep away from any forms of danger. He added that, through traffic investigations, the perpetrator has been held and will be presented to the prosecution.