Ministry of Awqaf to print 700,000 copies of the Qatar Quran 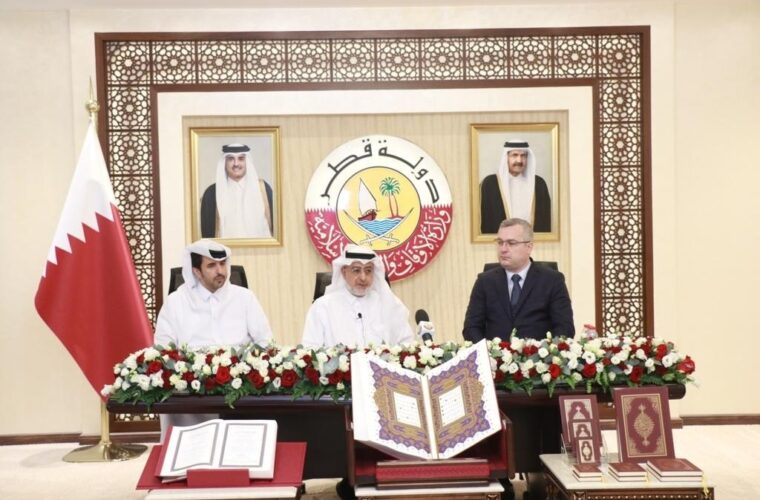 The Ministry of Awqaf and Islamic Affairs announced during a press conference held, Wednesday, June 29, 2022, that it is in the process of printing 700,000 copies of the Qatar Quran, which is the fifth edition since the launch of the Qatar Quran in 2010.

The contract stipulates that the printing process will take a full year from the date of signing the contract, including the paper supply period, bringing the number of printed copies of the Qur’an of Qatar in all sizes with the completion and receipt of the fifth edition to about 3.4 million.

His Excellency Dr. Khalifa bin Jassim Al-Kuwari, Advisor to the Minister of Awqaf and Islamic Affairs and supervisor of the printing of Qatar’s Qur’an, stated that the Qatar Qur’an project is the vision of an Emir and the path of a state, pointing out that the blessed march of Qatar’s Qur’an began during the era of His Highness the Father Emir Sheikh Hamad bin Khalifa Al Thani.

Dr. Khalifa bin Jassim Al-Kuwari, Minister of Awqaf and Islamic Affairs, Mr. Ghanem bin Shaheen Al-Ghanim, was keen to adhere to the highest standards in printing the Qur’an in terms of papers, type of ink, binding, decoration, colors, and all materials used in printing, pointing out that the selection of the printing press is also subject to precise technical standards and the Turkish printing press that was selected meets these criteria noting that they also printed the last two editions of the Qatar Qur’an.

The fifth edition of the Qur’an of Qatar includes three volumes:

Regarding the standards of the fifth edition, the supervisor of printing the Qur’an in Qatar confirmed that there are work teams that will supervise the printing of the Qur’an to ensure the standards and conditions that the Ministry of Awqaf is keen on so that the Qur’an comes out in a picture that befits the Quran, and to clearly reflect the State of Qatar’s interest in the Quran, noting that this edition It will be distributed upon completion within Qatar as well as to Muslims around the world.

In response to a question about whether there is a plan to print the Qur’an of Qatar with a narration other than that of Hafs, Dr. Al-Kuwari explained that there is an idea to issue an edition with the narration of Warsh.

Mr. Ertugrul Ozturk, director of the Bilnet Printing and Publishing, expressed his pride in cooperating with the Ministry of Awqaf and Islamic Affairs to print the Qur’an in Qatar in its fifth edition, after the printing press succeeded distinctly in the past two editions, pledging to continue printing the Qur’an according to the best technical standards.