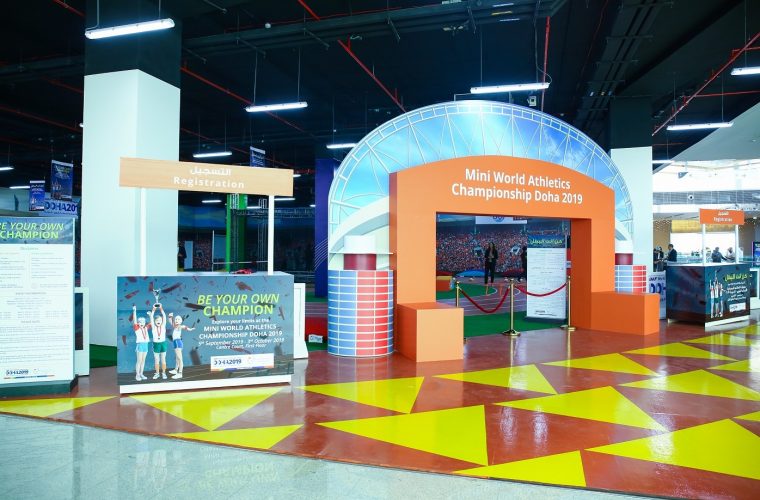 Doha Festival City, Qatar’s preferred and world class destination for entertainment, has partnered with the Local Organising Committee of the IAAF World Athletics Championships Doha 2019 as a National Supplier of the event, which Qatar has organised for the first time ever in the Middle East from 27 September to 6 October.

The stadium replica features six athletics events, spectator area, and a press conference space, giving the younger generation a glimpse of what fans can expect when the Middle East’s biggest ever sporting event begins in three weeks with the participation of first-class athletes from 213 countries.

The venue will open daily, from 2 pm to 10 pm on weekdays, and until 11 pm from Thursdays to Saturdays, welcoming children to play and enjoy a variety of athletics activities including jumping, throwing, relay races, sprints and hurdles.

On Mondays and Wednesdays, experienced coaches will be on the ground to offer training sessions for three hours at each pit, while on weekends children will compete against each other to win medals.

Senior athletes will also make an appearance on weekends to meet and greet their fans at Doha Festival City, where they will sign the bibs of kids club members and hand out medals and prizes to the winners.

Hazim Murad, Assistant General Manager-Doha Festival City, said: “We have worked with our creative team to produce a unique experience for children that resembles the real-life one. The venue is rounded with entrance gates and an audience area that makes it look like a miniature of the iconic Khalifa International Stadium.”

Robert Hall, General Manager -Doha Festival City, said: “We are so excited to partner with the Local Organising committee of the IAAF World Athletics Championships Doha 2019. We are keen on supporting the country’s efforts towards its 2030 Vision, and to celebrate such important moments and events with the people of Qatar.

“The partnership brings yet another unique experience to our shoppers and visitors and adds value to our retailers and business partners who chose us for being Qatar’s number one and preferred destination. We look forward to welcoming Qatar’s guests, citizens, and residents for this festival of world-class sport,” he added.

H.E. Sheikha Asma Al Thani, Director of Marketing and Communications at the Local Organising Committee, said: “We are thrilled to partner with Doha Festival City as a key national supplier who can support us in delivering a successful championship that showcases Qatar’s capability of hosting large-scale world sporting events. The mini championship enables us to further engage the public in sport and inspire the next generation of athletes, which is an integral part of our mission.”

As part of the partnership between Doha Festival City and the Local Organising Committee, tickets of the IAAF World Athletics Championship Doha 2019 will be available for sale at the mall at a dedicated booth opposite to Centrepoint store in the ground floor.