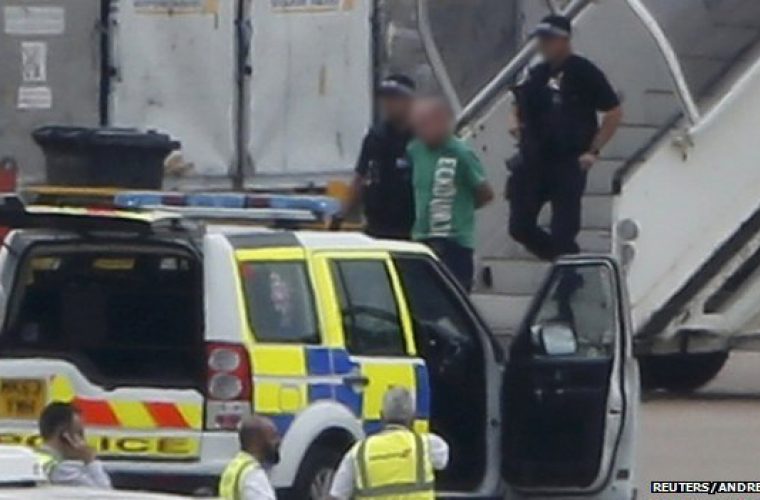 Military jets have escorted a passenger plane to Manchester Airport after reports of a possible device on board.

The Qatar Airways plane was escorted in to land by the Royal Air Force (RAF) following information received by the pilot.

Greater Manchester Police said it was treating it as a "full emergency" and armed officers boarded the plane.

A man on the Doha to Manchester plane has been arrested on suspicion of making a hoax bomb threat.

All flights in and out of the airport were suspended for about 25 minutes.

The plane involved was an Airbus A330-30, which had 269 passengers and 13 Qatar Airways crew on board.

It was escorted by a Typhoon from RAF Coningsby in Lincolnshire.

Operations at the airport resumed at about 14:00 BST after the plane landed at a terminal.

Passengers have been disembarking from the plane "as normal", an airport spokesman said.

Police reportedly armed with Tasers escorted a man off the plane

Josh Hartley, who boarded the plane at Doha in Qatar, said: "Well when the escort came it was very scary - I'm pretty shook up now."

Ch Supt John O'Hare from Greater Manchester Police said: "An incoming plane has been escorted into the airport by the Royal Air Force as a result of information received by the pilot about a possible device on board.

"We don't know how genuine this threat is but it is absolutely vital we deal with the situation as a full emergency.

"As a result people will see the police and other agencies at the airport and on the airfield. At this time I would urge them not to be alarmed.

"Our response will be as comprehensive as it is proportionate, with the safety of those on board and in and around the airport our paramount concern."

A statement for Qatar Airways confirmed flight QR23 landed safely at Manchester Airport ahead of its scheduled arrival time of 13:15 BST.

It said: "The crew onboard had received a threat about a possible device on board and Qatar Airways immediately took all the necessary precautions to alert British authorities.

"The crew is now fully assisting police at the airport with their inquiries."

Eye witness Chris Phelan, 42, from Heaton Moor, was in his garden when he heard the roar of a jet plane before filming it on his camera.

"I looked up and saw what looked like a Typhoon jet flying close to a passenger plane.

"I live on the flight path so I'm used to seeing planes coming into land but it's the first time this has ever happened in the four to five years I've been here."