March in Istanbul in solidarity with Qatar 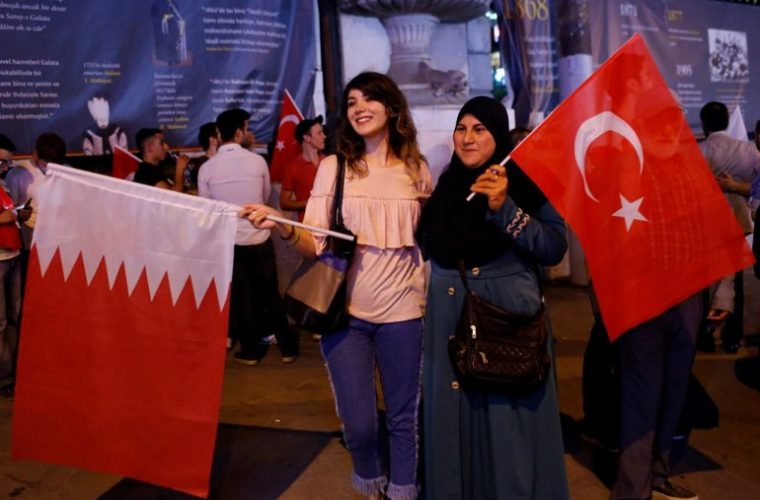 Turkish citizens and representatives of Arab communities residing in Istanbul on Wednesday night held a demonstration in support of the State of Qatar against the pressures and diplomatic boycotts of some countries, calling for not being dragged by external incitement aimed to create strife among the peoples of the region and to perpetuate crises and wars.

A group of Arab and Turkish activists holding the name "Group of Friends of Qatar" organized the event under the theme "Qatar is not alone". The participants came to Taksim in central Istanbul to affirm their solidarity with their Qatari brothers.

The group explained in a statement distributed to participants that foreign powers are trying to ignite a new war in the Islamic world, which, for years, has been suffering from painful crises, which resulted in the killing and displacement of millions of innocent people.

Demonstrators marched through Istanbul, waving flags of Qatar and Turkey and carrying banners reading "Qatar is not alone" and "Turkey with Qatar" while others chanted slogans against Israel and imperialist forces targeting the region and its people.

A number of participants told QNA that their demonstration in this circumstance reflects the status occupied by the Qataris to the Turks and the rest of the Arab peoples, confirming their confidence that Qatar will overcome this crisis soon.

Meanwhile Anadolu reported President of non-profit Qatar's Friends Group, Bekir Cantemir in a speech drew parallels between the 2013 coup in Egypt, the 2016 coup attempt in Turkey and what is happening in Qatar, accusing foreign powers of trying to destabilize the region.

"The coup was successful in Egypt; the Egyptian people could not get themselves out of the international intrigues… We gathered here against the moves of alienation and subversion of Qatar by plots, lies and defamation… Get your hands off Qatar. Your plans have been exposed,” Cantemir said.

#KatarYalnızDeğildir (Qatar is not alone) and #TurkeywithQatar Twitter hashtags went viral on social media in both Turkish and English in a bid to support Doha amid the ongoing rift.
On Wednesday, Turkey’s parliament ratified two deals on deploying troops in Qatar and training the nation's gendarmerie forces.

The deal on deploying troops on Qatari soil to improve the country's army and boost military cooperation was signed in April 2016, in the Gulf country’s capital Doha. (Source)