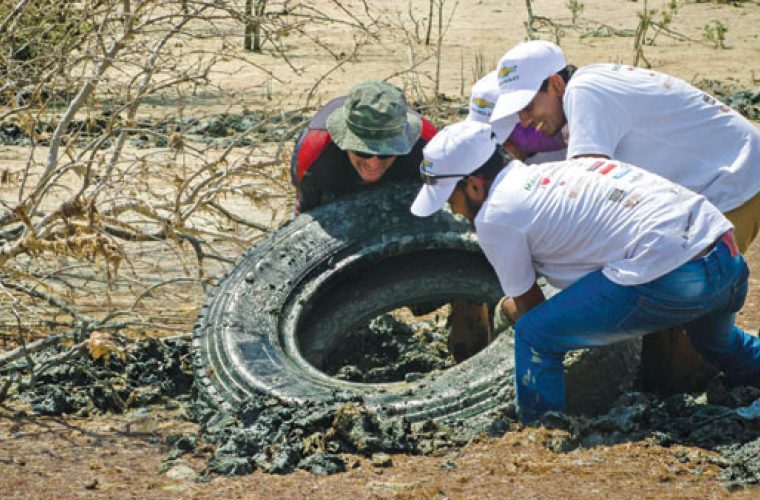 Hundreds of volunteers from various expatriate communities joined the mangrove cleanup drive on Friday at Al Thakira, pulling out big tyres from the mud and picking up bottles, plastic and barbeque pits’ leftovers, broken glass and other waste materials in the area.
Project leader Anri Taki said they collected two truckloads of garbage from the site while a big chunk was brought by Global Metals to its recycling facility.
“We had wanted around 200 volunteers to sign up, but only a few days later, we were surprised to get over 550 registrations,” she noted.
The activity aims to raise environmental awareness and urge people to keep their surroundings clean by simply not throwing garbage anywhere.
Taki described the mangroves as a “rare sight, an incredible and useful gift from nature: a haven to land, air, and sea creatures.” “You would be surprised to see what it looks like: a forest growing out of the coastline.”
Dozens of kilometres away from Doha, the mangrove site is located in Al Thakira via Al Khor-Al Thakira Road. It is home to Avicennia Maria, which is popularly known as the grey or white mangrove tree.
Earlier reports noted that these mangrove swamps are also home to a new species of sea slug discovered in 2007 by a member of the Qatar Natural History Group.
“The mangroves are also an incredible natural filter but even the filters at home need to be cleaned out now and then,” said Taki, who lauded the volunteers for sharing a few hours of their time to help preserve and protect the environment. “Everybody played their part in cleaning the area.”
The event was organised by Arabian Adventures Qatar and iloveqatar.net led by its CEO Khalifa Saleh al-Haroon. More than 20 organisations and government agencies, including the Qatar Tourism Authority and Hamad Medical Corporation also supported the initiative.
Organisers also provided free t-shirts, cleaning kits and food to volunteers who were divided into three teams: the land, shoreline and kayaking teams.
Leading the kayak teams, two groups called Paddle Qatar and Entalek also conducted brief talks on the importance of mangroves and how to protect them.
“Some people took on roles such as walking down the coast line holding big boxes of water and making sure everyone was hydrated,” said Taki. “Some boosted already elevated spirits with songs… and it was heartwarming.”
With an overwhelming response from residents and various expatriate communities, organisers noted that they will fully support similar initiative that will be conducted in the future.
Al-Haroon believed that this environmental undertaking “will get the ball rolling for people who participate to hopefully do their own thing too.”