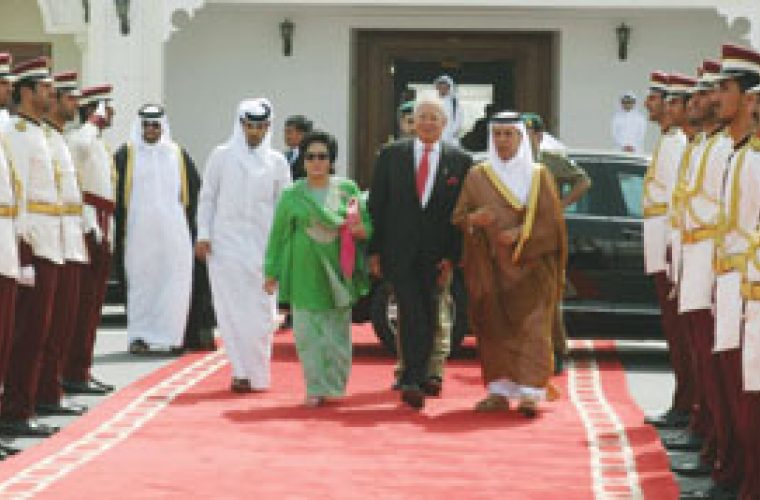 Malaysian Prime Minister Najib Tun Abdul Razak has expressed his country’s keenness to strengthen economic relations with Qatar, describing them as good. In a statement to QNA after a meeting he held with a delegation from the Qatari Businessmen Association, the Malaysian prime minister said opportunities for investment and co-operation are available to Qatar and Malaysia. He praised the existing economic relations between the two countries, expressing optimism that they would further develop. The Malaysian prime minister pointed out to the existence of further areas of co-operation between the two countries, especially in the field of infrastructure, oil and gas, tourism and industry. During the meeting with the delegation of the Qatari Businessmen Association Abdul Razak underlined his country’s readiness to provide all facilities to enhance co-operation between the private sector in both countries, praising the recent development of relations between the two sides. He admired the urban development taking place in Qatar, referring in this respect to the opportunities available to Malaysian companies to participate in this development and called, in the meantime, for the exploration of investment opportunities in his country. The Qatari businessmen underlined the importance of developing joint ventures between the two countries in various areas, whether in Malaysia or Qatar, including in the real estate, tourism and oil and gas sectors. They called on their Malaysian counterparts to invest in Qatar and to establish effective partnerships between the private sector in both countries, especially in light of the construction boom currently under way in Qatar. Later, the Malaysian prime minister and his wife left Doha after a two-day official visit to Qatar. He was seen off at Doha International Airport by HE the Minister of State for Foreign Affairs, Ahmed bin Abdullah al-Mahmoud and Malaysian Ambassador to Qatar Ahmed Jazari bin Mohamed Jawhar.