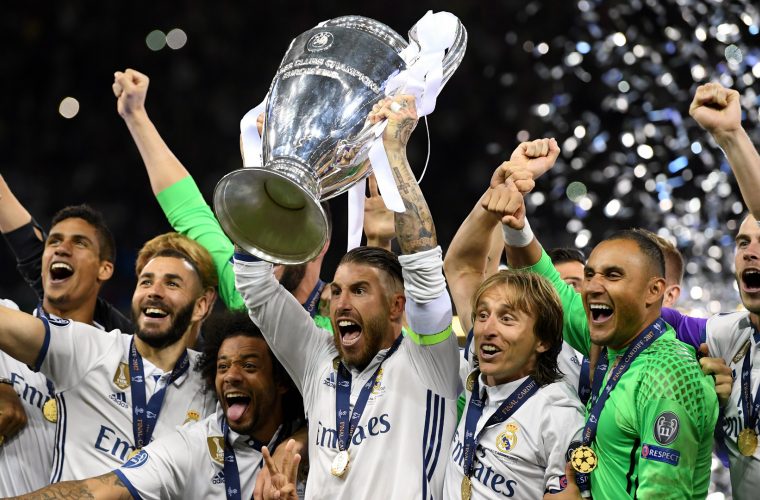 (The Main Men: Both Cristiano Ronaldo (front) and Mario Mandžukić (back) scored, but the Portuguese hitman's double proved to be the Real difference. Photo credit: Kreiszeitung.de)

Juventus faced off against Spanish Champions League-holders Real Madrid in Cardiff last night in the 62nd final of Europe’s premier club competition in a game that certainly didn’t disappoint – unless you support the Italian side.

Juve started brightly, enjoying the majority of possession and testing Real’s Costa Rican ‘keeper Keylor Navas from range a couple of times, but it was the Spaniards who went ahead on 20 minutes when Cristiano Ronaldo played a long-range one-two with Dani Carvajal on the right flank. As Ronaldo stormed forward, Carvajal whipped in the return from the right and the Portuguese slotted home from just outside the box.

Real’s lead lasted just six minutes, however. There seemed little danger when Croatian Mario Mandžukić picked the ball up about 20 yards out, but he tried his luck with an overhead kick which flew past Navas for the goal of the game.

All square at half time…

It had been a pulsating first half with some outstanding quality coming from both sides and you’d have been hard-pressed to pick a winner – but in the second half Real turned on the style big-time and ensured that the European Cup would be heading back to Madrid for the 12th time – an extension of their own record of 11 titles.

Brazilian Casemiro wound up a cannonball shot from fully 40 yards out on the hour, which hit the back of the net via a wicked deflection off Sami Khadira. It was cruel on the Italians, but where they’d been vital and energetic in the first half, they looked anemic in the second.

Three minutes later it was all but over when the self-effacing Ronaldo got his second of the game when turning in a cross from close range to make it 3-1. And it really was all over when Juve substitute Juan Cuadrado, who had only been on the pitch for 16 minutes, picked up a second yellow card for something only the linesman saw, and the referee produced the red card.

(The one they all want: The Champions League Trophy. Photo credit: Pinterest)

But Real were devastating in the second 45’…

Sergio Ramos tackled Cuadrado, and as the players got to their feet, Cuadrado literally brushed Ramos with his arm only to see the Real captain, no less, collapse to the turf as if he’d been shot. It was a disgraceful piece of cheating and while everyone will remember that Madrid won their 12th European Cup last night, they’ll also remember Ramos’ deliberately getting an opponent sent off with the game already all but won.

Real Madrid made their numerical advantage count when young sub Marco Asensio added a fourth late on. Madrid certainly deserved it on the strength of their second half performance. Whatever their manager Zinedine Zidane said to them at half-time clearly did the trick.

Real Madrid lauded in Doha? You better believe it…

A Real performance and result that was lauded in Cardiff, Madrid and also, without doubt, in Doha. Many smaller countries’ football fans often eschew their domestic leagues for the bigger European Leagues and football-mad Qatar is no exception, despite the improving quality of the Qatar Stars League.

The English Premiership is the most popular (and moneyed) of the leagues mentioned, but Qataris have definitely taken to the Spanish league’s big two – Real Madrid and Barcelona. No Barcelona in the final this year, with Juventus having knocked them out at the quarter-final stage, but Real Madrid categorically made their presence felt last night.

The secret to their popularity? Most likely because they’re probably the biggest club in the world and with 12 European Cups/Champions Leagues to their name, the most successful as well. Then there’s the small matter of two-goal Cristiano Ronaldo; love him or hate him – you can’t ignore him.

There’s a school of thought that’s increasing in popularity that the Spanish top flight is superior to the English Premiership, but that’s an argument for another time.

Did you watch last night’s Champions League Final? What were your thoughts on Real Madrid’s win and the game-play that got them there? Drop us a line in the comments below and don’t forget to give us a like and a share – it keeps us going!