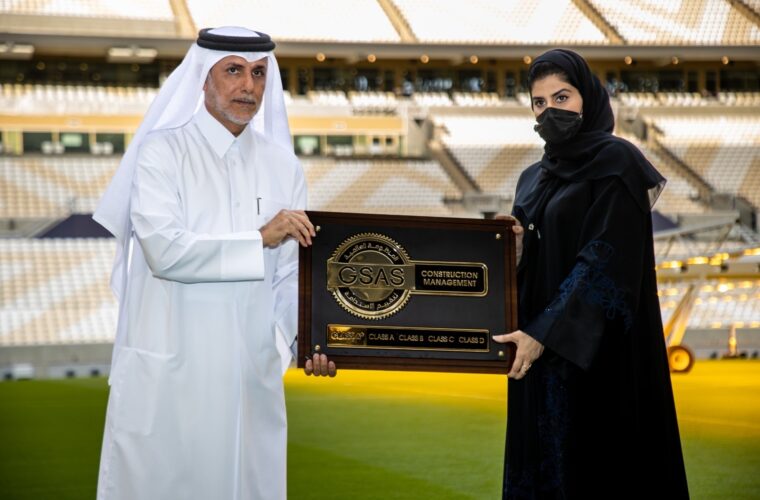 Lusail Stadium – the venue for the FIFA World Cup™ final on 18 December – has achieved a five-star rating under the Global Sustainability Assessment System (GSAS), which is administered by the Gulf Organisation for Research & Development (GORD).

The 80,000-capacity venue boasts a number of sustainability features, including a state-of-the-art roof and water efficiency systems. The stadium’s design is inspired by the interplay of light and shadow, based on the ‘fanar’ lantern, which illustrates the golden age of art and craftsmanship in the Arab and Islamic world.

“This recognition from GORD is an important part of our FIFA World Cup journey,” said Al Kuwari. “Sustainability has been central to our plans from the start as we are determined to develop venues that boost local communities here in Qatar long after the tournament. We are very proud to receive these awards and pay tribute to everyone involved in the construction of Lusail Stadium – an incredible venue that will host the biggest international football match on the planet – the FIFA World Cup final – later this year.”

One of Lusail Stadium’s most notable sustainability features is the roof, which is made from PTFE – a material that protects the stadium from warm wind, keeps out dust and allows in enough light for the pitch to grow while providing shade to reduce the burden on the stadium’s air conditioning.

“Achieving these top ratings is testament to the hard work of the project team, which prioritised sustainability features from the design phase all the way through to construction and operation,” said Al Meer. “In addition to the roof, the project site has conserved 40% more water than conventional stadium developments thanks to efficient fixtures and leak detection systems.”

Al Jaidah added: “We thank all our contractors and stakeholders for helping us to achieve this valuable award, which is yet another proud moment in our FIFA World Cup sustainability journey.”

After Qatar 2022, Lusail Stadium is set to host a number of civic facilities for the local community. Any seats removed from the venue could be donated to countries that lack sporting infrastructure.

Eight stadiums will host matches during Qatar 2022, which will take place from 20 November to 18 December. Each venue has achieved a minimum four-star rating under GSAS, which was adopted as a sustainability rating system by FIFA and will ensure all tournament-related infrastructure meets stringent environmental standards.

Dr. Yousef Alhorr, Founding Chairman, GORD, said: “By meeting the exacting GSAS standards, Lusail Stadium has set a new precedent in environmental excellence, guided by the SC’s sustainability strategy. We congratulate the SC for advancing climate action by successfully translating green building principles into impactful practices. This is testament to the strong commitment to sustainability – which has been apparent from before ground was broken at Lusail and other venues.”

Lusail Stadium will host ten matches during Qatar 2022, starting with Argentina versus Saudi Arabia on 22 November, and ending with the final on 18 December, which is also Qatar National Day.