LPG ban a blow for eateries 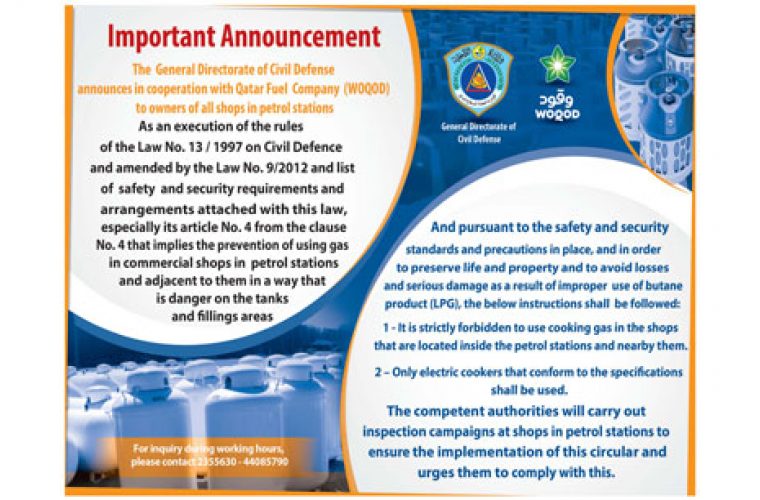 Several eateries at fuel stations are struggling to cope without LPG following an order by the authorities to immediately stop its use for cooking.

Woqod, which supplies LPG cylinders and tanks to these eateries, has been busy emptying them over the past two days.

A Woqod team, supported by Ministry of Interior staff, was seen at the Abu Hamour petrol station last morning, moving from one eatery to another, emptying LPG tanks and cylinders.

The eateries will be reimbursed for their losses, a team member told this daily.

In the absence of cooking gas, most eateries are functioning only partially. Some leading fast food outlets have switched over to electric stoves since they already have the facilities to use both gas and electricity.

Some others are serving only barbecued food, which can be cooked on charcoal. An Arab restaurant was seen preparing shawarma using charcoal, with the smoke spreading inside causing inconvenience to the customers.

“It is difficult to make shawarma and fatair on charcoal. But we have to meet our expenses and pay the employees,” said the restaurant manager.

The owner of another Arab restaurant said he would have no option but to close down. “For using electricity we have to change the whole equipment. We are paying QR23,000 as monthly rent, and if we use electricity it will cost us heavily. Finally, we would be forced to shut down and move to another location,” he said.

The manager of an Indian restaurant said they had stopped cooking food in their kitchen following the authorities’ order.

“We are bringing food from another eatery that we run in the city. But we need gas to keep the food warm,” he said.

The owner of another Arab restaurant said they were also bringing food from another eatery located far way, in Dafna.

“You can imagine the practical difficulties in transporting food all this distance several times a day,” he said. A Woqod team member indicated that a solution to the issue would be found soon. He didn’t elaborate.

Some eatery owners questioned the logic behind focusing only on eateries at fuel stations. “There are many eateries working with cooking gas in closed areas like shopping malls. Accidents can happen in such places as well,” said one.