Lodaihy (Oryx) intersection to be completely open to traffic tonight, and Onaiza on Friday 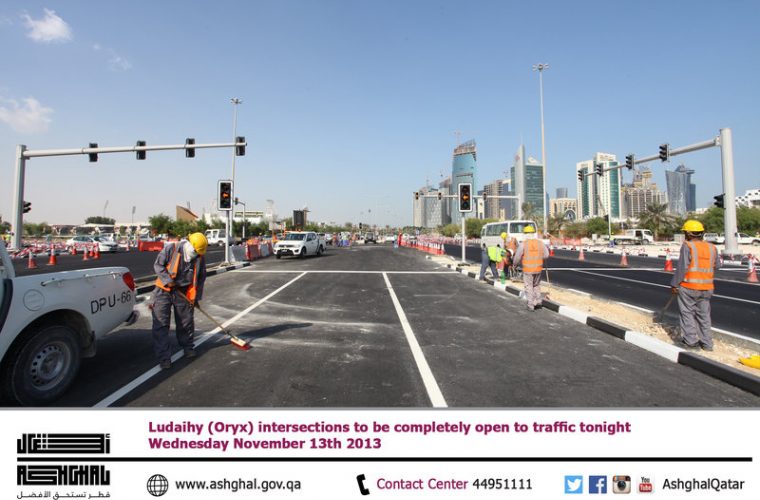 The Public Works Authority ‘Ashghal’ announced the opening of Lodaihy (Oryx) intersection tonight (Wednesday November 13th) after converting the roundabout to a signal-controlled intersection. The completion of this task, and the opening of the intersection to traffic came as a result of the efforts exerted, and the works that continued around the clock to finish this task, to the fullest, in a record time. It is also worth mentioning that on November 10th, Ashghal has opened Lejbailat intersection. These achievements will be complemented with the opening of Onaiza intersection in two days (Friday November 15th). With this opening, the conversion of the roundabouts to intersections at Corniche Street and its surroundings will be completed as planned. It is also noteworthy that the efforts exerted by Ashghal’s team and contracted companies, as well as other government entities, especially the Traffic Police and Lekhwiya who worked relentlessly to ensure the traffic flow in these lively areas, were an important factor that made the opening of all intersections leading to the Corniche Street easier. The new intersections have a number of extra corridors, with wheelchair access, for pedestrians. They are also equipped with light signals for pedestrians to ensure their safety. Moreover, new lanes were constructed at all new intersections to ease the U-turns and left-turns while avoiding traffic congestions. Last but not least, ‘Ashghal’ thanks all road users who have been tolerant with the roads closures in order to accomplish all the works on time. - ILQ News -