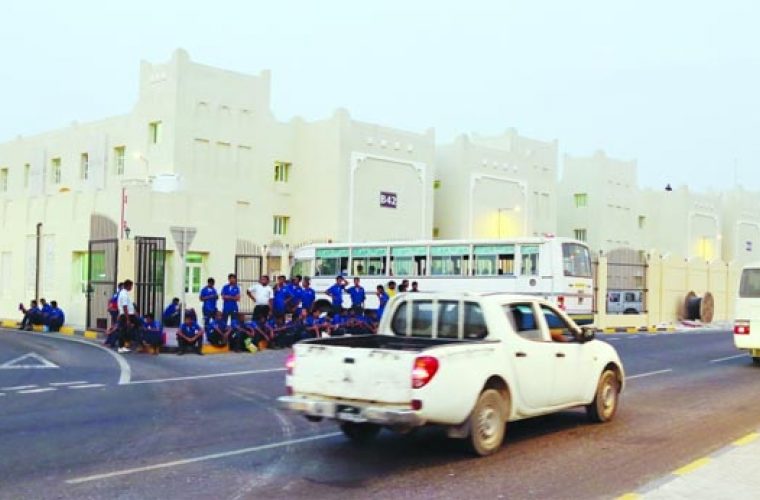 The Cabinet has approved a draft law that prohibits labourers from residing in areas inhabited by families.
It also approved draft decisions on regulations and procedures for special committees that would be set up to settle real estate development disputes.
Under the provisions of the housing draft law, it is prohibited to rent, lease or allocate places and parts of places of all types in family residential areas for the accommodation of labourers, the official Qatar News Agency (QNA) reported on Wednesday.
HE the Minister of Municipality and Urban Planning may exclude some areas or categories of workers from the purview of this law, however.
The competent authorities should refrain from delivering public services and facilities to properties provided as labourers’ residence until the lease is registered at the lease registration office in municipalities, the draft law stipulates.
After the regular Cabinet meeting chaired by HE the Prime Minister Sheikh Abdullah bin Nasser bin Khalifa al-Thani at the Emiri Diwan, HE the Deputy Prime Minister and Minister of State for Cabinet Affairs Ahmed bin Abdullah al-Mahmoud said it was also decided to approve draft decisions on forming committees to settle real estate development disputes and procedures for examining applications as well as the rules to be followed by the committees.
These include provisions related to the regulation of meetings of the committees on rent dispute settlement, procedures to be followed for requesting a settlement, inviting the parties concerned to negotiate and the duration of issuing a committee decision.
The draft decisions envisage the creation of one or more committees at the Ministry of Economy and Commerce (MEC) to decide real estate development disputes under the chairmanship of a judge from the Court of First Instance, who is to be chosen by the Supreme Judiciary Council.
Two other members are to be chosen by the MEC and one will be from the Ministry of Justice. Each committee will have a secretariat that will follow up on the implementation of decisions issued by the panel concerned.
In addition, the Cabinet endorsed a draft decision by HE the Minister of Economy and Commerce on having a registry of real estate developers. It specifies the rules for preparing the registry as well as the details of those registered and the means of requesting, renewing and removing registration.
Further, the Cabinet ratified a decision by HE the Minister of Economy and Commerce on adopting payment procedures from the bank security accounts of real estate projects.
The drafting of these bills is in line with provisions of Law 6 of 2014 on the regulation of real estate development. It seeks to regulate real estate transactions to ensure rights pertaining to real estate ownership, facilitate procedures and expedite the process of settling disputes.
Meanwhile, the meeting approved a cabinet draft decision to amend and regulate some administrative units that form the Qatar General Electricity and Water Corporation, specifying their powers.
It also approved a draft decision by HE the Minister of Energy and Industry to establish departments within the administrative units of the corporation and specify their powers.
In addition, the Cabinet ratified a draft agreement on legal co-operation between the Ministries of Justice of Qatar and Romania.
The meeting examined a report by a team tasked with studying the creation of a comprehensive statistical mechanism that includes both residential and commercial leased places as well as a draft law on amending some provisions of Law 4 of 2008 on property lease, which was prepared based on the study’s outcome.
The Cabinet reviewed a letter by the financial information unit on its 2014 annual report and a letter by the board chairman of Qatar Financial Centre Regulatory Authority on its annual report and audited accounts for 2014.