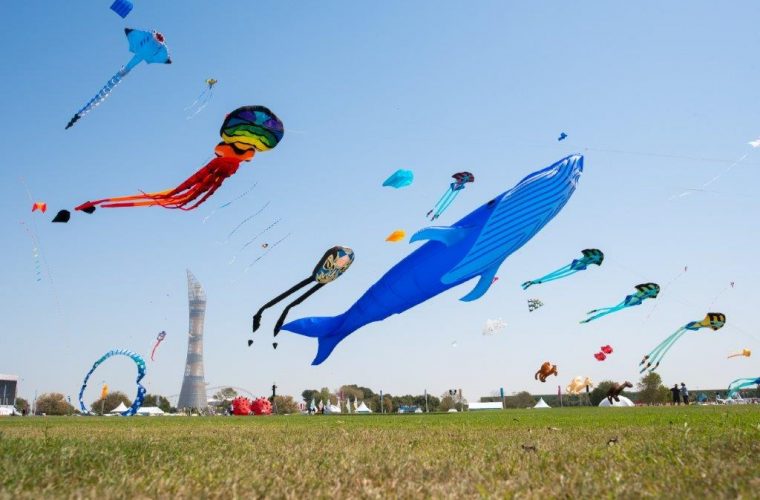 The competing teams have designed and tested more than 200 kites over Aspire Park’s skyline every day. Participants of the international competition compete in three categories: Biggest Kite, Best Kite Design and the Best National Flag.

In addition to the international competition, Aspire Zone Foundation (AZF) has organised a friendly inter-school competition for teams representing 16 local schools, including Aspire Academy, to introduce children to the sport of kite flying.

Winners of the international and inter-school kite flying competitions will be announced during the event’s awards ceremony, due to take place on Friday (March 09) in Aspire Park at 7:30 PM. The ceremony will also mark the conclusion of this year’s popular event.

Senior representatives from AZF and the event’s partners Qatar Airways, Katara, the Supreme Committee for Delivery & Legacy, Ooredoo, Salam Stores and Virgin Megastores, are expected to attend the closing.

Commenting on Qatar’s participation in the festival, Mr. Mohammed Bin Fahad Al Thani, member of the Festival’s organising committee, said: “We’re proud to see a team representing Qatar participate in the Festival for the first time. Their participation is a testament to the success of last year’s event, which helped spread awareness about the art of kite flying among community members in Qatar of all ages.”

Judges for this year’s competition include some of the world’s biggest names in kite art and design. Such as: Italian painter, sculptor and theatre scenographer Claudio Capelli, American kite artist, painter, graphic designer and aerial sculptor, George Peters, German lifelong kite artist and Franck Shwiemann, Canadian painter and former indoor cycling track champion in Canada, Robert Trepanier, and Japanese garden designer who devoted much of his live to improving culture of kite art in his country, Makoto Ohye, and one of the most French wind fan artists and environmental-friendly installations, Michel Gressier.

A poster competition has also set children aged between of 5-13 the challenge of drawing the best illustration of a kite in the skies above Aspire Park for a chance to win valuable prizes from Virgin Megastores.

Along with the International Kite Festival, AZF, in collaboration with the Qatar Photographic Society, launched a photography competition for amateur and professional photographers in Qatar. Entrants can compete by posting their photos on social media under the hashtag #AspireKiteFest for a chance to win valuable prizes and the honour of being crowned the 2018 Aspire International Kite Festival Photography Competition winner.

The first-place winner of the 2018 Aspire International Kite Festival Photography Competition will win a 20,000 QAR cash prize; second place will win a business-class plane ticket to a destination of their choice; third place will receive two economy class plane tickets; while fourth and fifth places will each receive a professional camera.