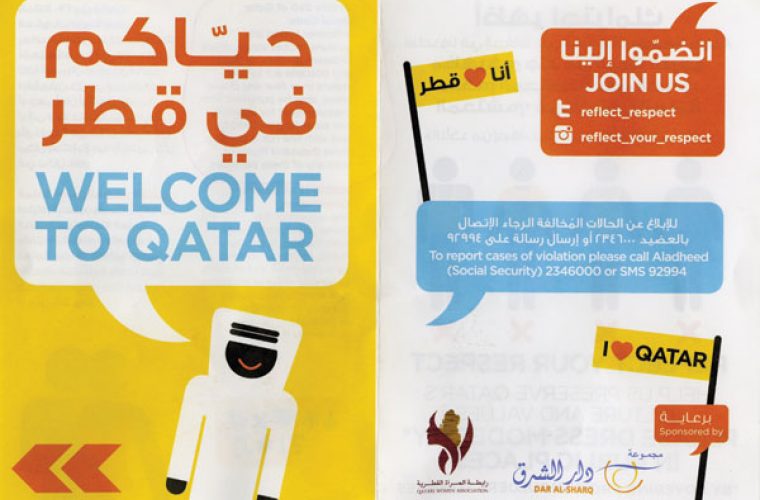 Dressing up indecently in public or in a way that you are not covered from shoulders to knees, can land you in jail for six months or make you pay a fine of up to QR3,000 or both, says a lawyer.

Article 290 of Qatar’s Penal Code that specifies the punitive action also bars people from making indecent gestures at women, taunting and singing songs looking at them or passing on phone numbers to women who are strangers.

A campaign launched yesterday to implore non-citizens to respect Qatari customs and traditions, reminds them of the above legal provisions.

A flier distributed as part of the campaign asks men and women to dress up in a way that they are covered from shoulders to knees while in public.

The flier says Article 290 of Qatar’s Penal Code can be invoked against those found disrespectful to local customs and traditions.

According to Mohsin Thiyab Al Suwaidi (pictured), several cases have been filed under the article and pending in courts. The Article not only talks of punitive action against people dressed up indecently in public but also against those who make indecent gestures to women, recite songs looking at them or try to pass on their telephone numbers.

The flier gives telephone (2346000) and SMS numbers (92994) for people to file complaints against indecent clothing and behaviour in public.

The campaign ‘Reflect Your Respect’ (and Help Us Preserve Qatar’s Culture and Values) has strong support from the Qatari community, according to Al Suwaidi.

“This is just a polite way of asking foreigners in our midst to respect our culture and traditions.”

In remarks to this daily, he said there were serious concerns in the Qatari community about the way foreigners — men and women — dress up in public, especially in malls and hypermarkets.

“Our women and children go to these places frequently, so people going there should not be walking in shorts and short skirts.

“We respect others’ freedom so people should reciprocate and respect our freedom and traditions and culture. We are telling people this politely.”

He reiterated that there are many cases in courts of people trying to pass on their telephone numbers to women in public places, making indecent gestures and eve-teasing.

“But I don’t think there is any case so far of men and women seen dressed up indecently in public. However, that doesn’t mean that such cases cannot be filed in future,” the lawyer said.

Since the Qatari population is heavily outnumbered by foreigners, there is more concern in the local community about preserving their values, customs and traditions.

Al Suwaidi said people should know what Qatari customs and traditions are and should respect them.

“They should also know the legal means available to help preserve Qatari values and culture. It is good that they are being told of Article 290.”

He suspected that the foreign media would be critical of the campaign and might try to project it as an effort to deprive foreigners in Qatar of their freedom. “They might attack Qatar, but that wouldn’t be justified,” said the lawyer. He recalled how France banned ‘hijab’ by Muslim girls in schools.

A law to that effect was passed by the French parliament. “That was against their values, we understand that. Similarly, the West should try and understand our concern for our values.

“Foreigners are free in Qatar but that freedom should end when others’ freedom is breached. They should not enjoy freedom at our expense,” said Al Suwaidi. “Like France, however, we are not forcing people. We are just making a polite request.”