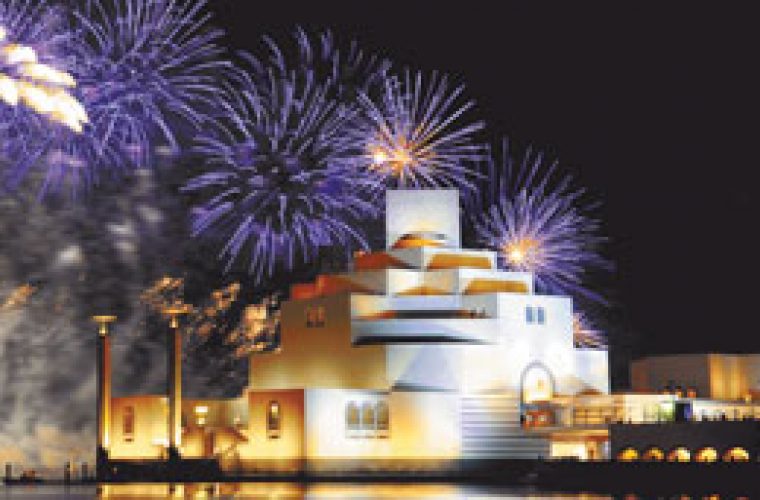 Islamic Arts Museum lights up the sky Qatar officially opened on Saturday its landmark Museum of Islamic Art in Doha, designed by Chinese-American architect I.M. Pei, amid fireworks and in the presense of a number of regional heads of state. Qatar's Emir, Sheikh Hamad bin Khalifa Al-Thani and his consort Sheikha Mozah bint Nasser Al-Missned presided over the inauguration ceremony whose guests included Bahrain's King Hamad bin Isa Al-Khalifa of, UAE president Sheikh Khalifa bin Zayed Al-Nahyan, Syrian President Bashar Al-Assad, Djibouti's President Ismail Omar Guelleh and Kuwait's Crown Prince Sheikh Nawaf Al-Sabah and actor Robert de Niro. In her address to the assembled guests, the Emir's daughter Sheikha Mayssa, Chairperson of the Board of Trustees of the Qatar Museums Authority, said: "We aspire, through this museum, to highlight the peaceful and sublime civilization of Islam, which continues to call for tolerance and coexistence among peoples." Sheilha Mayssa also announced the setting up of a Chair of Islamic Architecture at Oxford University in the UK to be named after the museum's Chinese-American architect I.M. Pei whose landmark buildings include the glass pyramid at the Louvre and the Bank of China building in Hong Kong. "In recognition of Mr. Pei's contribution to Qatar, deserving our highest praise and appreciation, I am pleased to announce the inauguration of a new Chair of Islamic Architecture at the University of Oxford that will bear his name. This Chair is a partnership between the Museum and Qatar Foundation for Science and Community Development," she said. The museum was originally scheduled to open in time for the Doha Asian Games in December 2006. Qatar has declined to say how much was spend on the 45,000sqm museum which stands on an articifial island at the southern end of Doha's corniche. Many of the collections 800 or so objects from three continents, illustrating Islamic culture from the seventh to the 19th centuries, were acquired in recent years at auctions in the world's major cities. They include such items as a silk wall-hanging that once adorned the Alhambra in Granada, Persian miniatures from the great 16th-century Shahnameh of Tahmasp and a jade pendant worn by a Mughal emperor, Shah Jahan, builder of the Taj Mahal. Arabian Business Also read: Museum opens to world acclaim A night to remember Additional Photos: