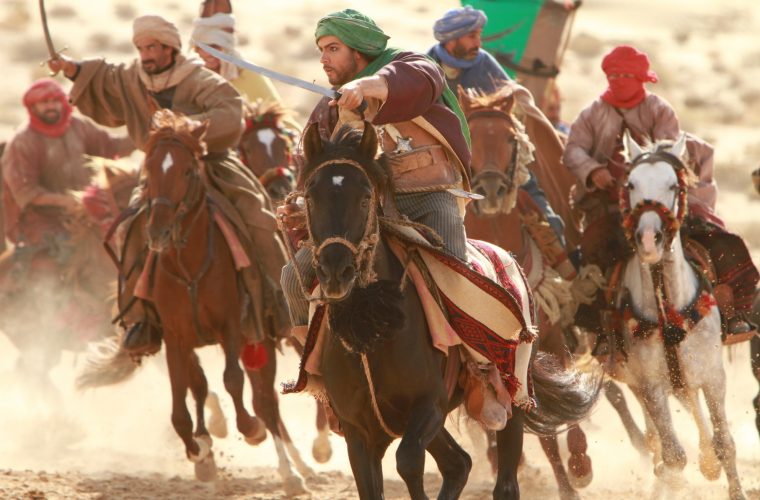 International Epic “Black Gold” Begins Shoot In Qatar Film starring Antonia Banderas, Freida Pinto and Tahar Rahim co-produced by the Doha Film Institute and Quinta Communications Doha, Qatar February 13, 2011- Tarak Ben Ammar’s Quinta Communications and the Doha Film Institute today announced that filming of the epic feature film “Black Gold” has now begun in Qatar. The timing of the announcement coincides with the release of the first images from the film. The movie, one of the biggest projects to be made about the Arab world, stars Antonio Banderas, Freida Pinto,Tahar Rahim, Mark Strong, Riz Ahmed and Liya Kebede, and is an epic adventure adaptation of Hans Reusch’s classic novel “The Great Thirst”. Acclaimed French filmmaker Jean-Jacques Annaud (“Quest for Fire”; “The Name of the Rose”; “Seven Years in Tibet”; “Enemy at the Gates”) will helm the $55 million epic based on the screenplay by Menno Meyjes (“The Color Purple”; “Empire of the Sun”; “Indiana Jones and the Last Crusade”). Jean-Jacques Annaud and Alain Godard have co-written the story. Principal photography began in Tunisia on October 18 last year and wrapped there on January 23 on budget and on schedule despite the final few days of filming taking place against the unfolding Jasmin Revolution in Tunisia. Filming has now moved on to Qatar in the spectacular desert dunes of Mesaieed where all the battle scenes will be shot. The feature film is the first major, international project to shoot in the country. Photography in Qatar will last for four weeks. ”Black Gold” tells the story of the rivalry between two Emirs in Arabia in the 1930’s just as oil is being discovered, and the rise of a young, dynamic leader who unites the various tribes of the desert kingdoms. The film will sweep audiences into the heart of the Arabian Peninsula in a way not seen since David Lean’s seminal “Lawrence of Arabia” some fifty years ago. As previously announced, Warner Bros and Universal Pictures International will distribute the film worldwide on a multi-territory basis, an unprecedented feat for a film about the Arab world. Warner Bros will distribute the film in France, the United Kingdom, Latin America and the Middle East. Universal Pictures International (UPI) will distribute the film in Germany and Spain. Quinta Communications’ Eagle Pictures is handling distribution in Italy. Remaining distribution deals are currently being finalised for a worldwide holiday release in November, 2011 Tahar Rahim, after his award-winning, breakthrough performance in Jacques Audiard’s award winning “Un Prophete,” will play the lead role of Prince Auda in “Black Gold”, a hero torn between two fathers, two loves, two choices, one destiny. Mark Strong (“Robin Hood”; “Sherlock Holmes”; “Kick-Ass”) is Auda’s father Amar, ruler of Salmaah, who is forced to give up his beloved two sons after losing a battle to his fierce enemy Nessib, ruler of the kingdom of Hobeika, played by Antonio Banderas (“Mask of Zorro”; “You Will Meet a Tall, Dark Stranger”) . Frieda Pinto (“Slumdog Millionaire”; “Miral”) plays Princess Lallah, the daughter of Nessib and future wife of Auda. Riz Ahmed (“Four Lions”) plays the role of the wisecracking Dr. Ali, half-brother to Auda, while supermodel Liya Kebeda (“Flower of the Desert”) plays fiery Bedouin slave girl Aicha. Tarak Ben Ammar: “I am delighted to have started filming in Qatar. We are filming in some of the world’s most stunning desert landscapes and that will help Black Gold look even more spectacular. Also, filming here gives me the opportunity to support and encourage the Doha Film Institute’s vision of building a sustainable film infrastructure in the country” Amanda Palmer, Executive Director of DFI said, “Black Gold is the first major international co-production for The Doha Film Insitute and Qatar. A large scale production is a challenging and ambitious start for DFI's co-production, but this film will give us the experience and know-how to build the beginnings of a dynamic film industry in Qatar. We're honoured to work alongside director Jean Jacques Annaud, not only does he possess the right sensibilities to tell this beautiful Arab story, he also understands the importance of teaching Qatari nationals and residents about film production. He has integrated a Qatari based team into his staff to teach them on location about filming in their country and filmmaking in general. We're mobilising a whole country behind this film to establish Qatar as a global film hub”. The DFI, Palmer added, is inspired by the emerging film industry structure in Romania, Tunisia and New Zealand, which began with international co-productions. Qatar aims to further explore their model through DFI’s film financing arm. Central to both Quinta Communications and Doha Film Institute is the fact that “Black Gold” will deliver to audiences around the world an entertaining adventure in the Arabian desert and the kind of breathtaking action and spectacle that contemporary audiences are craving for.