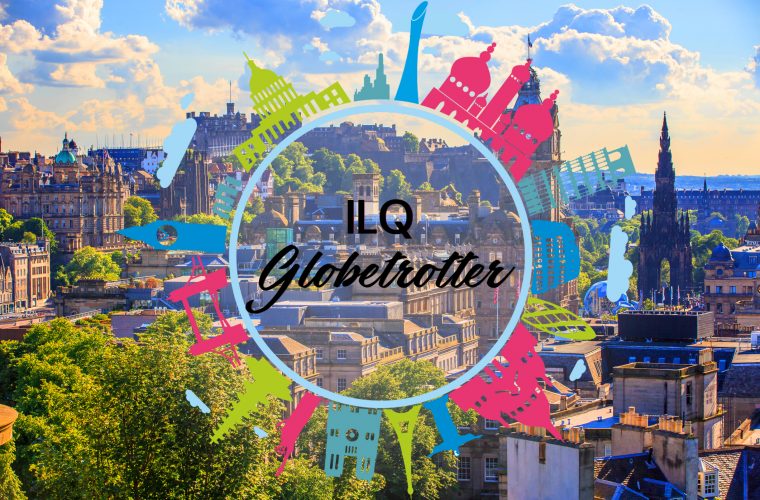 Located at the west end of the main thoroughfare in Edinburgh – Princes Street – is an imposing sandstone building: The Waldorf Astoria Edinburgh – The Caledonian.

This five-star property sits atop what was formerly a railway station, and the old accesses to the platforms and ticketing area – plus other fantastic period features – are faithfully retained in the hotel lounge.

Qatar Airways has been running a service from Doha to Edinburgh since 2014 (daily since 2015), and the likes of the Waldorf Astoria is where more affluent passengers visiting from the peninsula are often to be found.

(Room with a phew! -- The bedroom of our two-room suite. Photo credit: Waldorf Astoria Edinburgh)

My wife and I recently spent two nights there in an enormous suite on the first floor, looking directly onto Edinburgh Castle – quite the view. A bathroom (with separate power shower and Salvatore Ferragamo toiletries) split the suite into the enormous living room on the left, from the equally spacious bedroom on the right.

The bed was huge and very firm, while against one wall an antique desk turned into a workstation for me with my laptop connected to the complimentary WiFi. A giant flatscreen TV sat flush to the wall opposite the bed with 100+ channels on offer.

In the suite’s living room, some beautiful furniture and an antique table lent the room a very genteel air, which was also home to a mini-bar, capsule coffee-maker, and an even bigger television. We kind of got the feeling this is a room you would use if you were entertaining. We weren’t, so it felt a little underused in our case!

The hotel’s split-level gym and pool area helped build up an appetite for that evening’s dinner. As well as a full multi-gym, mixed sauna and steam rooms, the gym has a 25m pool, splash area, and Jacuzzi. The gym has an adjacent, exclusive Guerlain Spa – the only one in Scotland – but treatments are, unsurprisingly, extra!

Dinner at the Waldorf Astoria can be taken at either the fine-dining ‘Pompadour’ or the ‘Galvin Brasserie’, both brands of the London-based and Michelin-starred Galvin brothers. We decided on the Brasserie, as we fancied something a little more relaxed.

In short, this was superb. My wife opted for the asparagus velouté to begin (I saved myself for my main course) which she followed with a main of spring lamb rump, roast aubergine and chickpeas, while I went for a traditional Aberdeen Angus cheeseburger with fries. While my wife polished off her main with ease, the sheer size of my burger (delicious though it was) defeated me, and a doggy bag was called for. For dessert, we shared a sumptuous apricot soufflé with chocolate sorbet, washed down with a bottle of Prosecco. Home-made bread and butter arrived at the table periodically which had a superb, rustic taste with just a scrape of butter.

The bill for the four courses and fizz was about QR 470. A bargain.

(Up front -- Lighting up the façade of the hotel. Photo credit: carpediem.tv)

Time for the feet to hit the street

Tempting though it was, we didn’t spend our entire two days in the hotel. Edinburgh’s popularity stems from not only its fantastic aspect – it’s a beautiful city to look at – but it also has a number of world-class tourist attractions. We took in three of the ‘blue chip’ attractions: the National Museum of Scotland (free), the ever-popular Edinburgh Castle (stunning views on a clear day – QR 94), and the Royal Yacht Britannia which is absolutely steeped in tradition and history (QR 84).

All too soon our time was up at the hotel and we checked out after a wonderful – albeit brief stay. The property, quality of the room, the public areas, food and beverage, and the levels of service were all as you would expect from the Waldorf Astoria name and I would have no hesitation in recommending this hotel.

I was pleasantly surprised at the hotel’s pricing, considering its status as one of the best hotels in Edinburgh, if not Scotland. In low season, a double room with breakfast costs from QR 746 per night, and QR 1,400 per night in high season. This is pretty good value for what you’re getting. Hopefully we will return one day…

Where are your favourite summer vacation destinations? Drop us a line in the comments below and tell us how you’ll be spending your holidays. Also, don’t forget to give us a like and a share – it keeps us going!