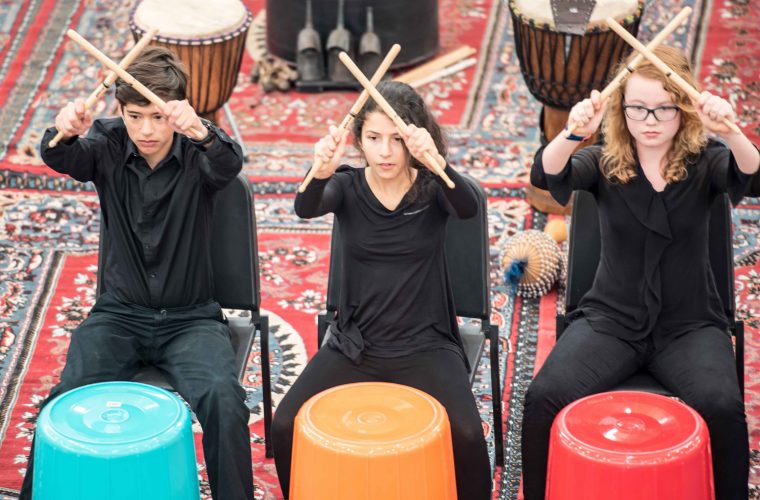 Music has the power to heal, to unleash creativity, to act as a platform for expression – and, it’s just plain fun! One such musical showcase, the Rhythm Explosion, is back on Friday, January 19, 2018, for its third year running after an incredible show in 2017 at Sherborne Qatar (Bani Hajer). This year's event will see a great variety of music performed by students selected from a number of schools across the city.

Founder and organizer, musician Michael Pignéguy has again teamed up with South African drumming master Patrick Dilley to present the show. Between them, they’re assembling an incredible array of talent, as well as special guests who will perform alongside and separately to the students.

And the best part? All profits from the event will be donated to the United World Schools charity! ILQ sat down with Michael to learn more about what makes this musical medley so empowering for young musicians.

ILQ: Tell us everything about the Rhythm Explosion!

MP: The Rhythm Explosion is a performance event that aims to bridge the gap between upcoming and professional musicians. The atmosphere is one of excitement and encouragement where exploration and excellence is encouraged at all levels. Percussion instruments from different parts of the world always feature prominently but there’s no particular style that must be dominant.

ILQ: So, if I’m a young musician, how can I get involved? Is there a certain process for recruiting new talent each year?

MP: The amount of participants has expanded since the inaugural event which was held at the American School of Doha (ASD), and included only students from that school. There are now groups from a number of different schools around Doha, plus Qatar Music Academy in Katara. However, there could certainly be a wider net cast and more publicity about the potential for involvement. This is certainly something I would like to expand on for future events. As well as young, usually school-based students, many amateur adult performers are involved also.

ILQ: Why drumming and why rhythm? What are some of their therapeutic and creative benefits for youth?

MP: I love rhythm and drumming and I also believe participating in structured music-making, particularly in groups, has a ranges of positive benefits for people of all of ages. Challenging yourself to develop skills on any instrument, and being reflective and mindful of how you can continue to improve, is a very important and rewarding skill to develop. As with other pursuits, seeking out a mentor can be important too so that you can access guidance and feel the joy of overcoming obstacles. Performing with others is a very tangible and rewarding outcome of these efforts. Rhythm is a cornerstone of almost all music, but particularly contemporary styles!

ILQ: You’ve partnered once again this year with master drummer Patrick Dilley, who brings the South African beat to the Explosion. Are there similarities between the African style of drumming, and drumming that can be found in Qatari and Arab traditional culture?

MP: Patrick and I both have a passion for sharing the joy of music-making across large age and ability ranges to hopefully help people access multiple pathways into experiencing music – particularly in groups. In terms of the similarities between Khaleeji and Arab/Oriental drumming/rhythms and those from South Africa or other parts of the world, the styles, techniques, and instruments are actually quite different. However, this doesn't mean there isn’t potential for the two to work together. It’s something that Patrick and I continue to explore and I have focused a lot on in group The Awakenings Ensemble.

ILQ: Will there be a Qatari element to this year’s show?

MP: Yes, there will be some Qatari performers in the show this year who are students from the various schools. We don't have a Khaleeji piece in the program, but that’s certainly something I would like to include in future events.

ILQ: What else can audiences look forward to for 2018? Have you incorporated any new performances?

MP: This year we have three very special guests –Spanish singer Ana Cisneros, British pianist Phil Wilkinson, and Hungarian bassist Sándor Ónodi. I’ll join them to perform a selection of Latin and South American pieces. They’re incredible musicians and performers and I'm sure this segment will be one of the highlights of the show!

ILQ: All of the proceeds from the event are going to United World Schools. Can you tell us a bit about this initiative and why you chose to support it?

MP: Each year the proceeds from the event go to a specific charity or scholarship which is chosen by the host school. The first year, ASD chose a student scholarship, and last year Sherborne College chose Reach Out to Asia. This year, Sherborne has chosen United World Schools. I and the other professional artists have been very happy to support each of the chosen beneficiaries who make such positive contributions to so many different lives.

ILQ: Your work as a performer and composer is often featured in the music of The Awakenings Ensemble. What are some of the current activities the group?

MP: The Awakenings Ensemble is my main focus for writing, recording, and performing music. It was started in 2011 and released its debut album, ‘Speak’, in 2012, which was recorded in Doha and Dubai, as well as in Perth and Melbourne, and featured musicians from around the world. The group has performed in the Gulf, in Australia, Asia, and will perform in the U.S. later this year.

I'm very excited about one of the U.S. performances in particular which will take place at one of the most respected music venues in the world, the iconic Dizzy's Club at Lincoln Center in New York! We'll feature some of our recent recordings at that show including our latest recording of jazz classic 'My Funny Valentine' which has been completely re-interpreted in a very modern way, featuring an amazing vocalist called Samantha de Lune from Malaysia.

ILQ: Finally tell us about the recent release of your new iBook Groove Masters. What is it and where can people check it out?

MP: ‘Groove Masters’ is an interactive multimedia Apple iBook designed for students of any age that would like to explore the world of drumming and percussion. It incorporates audio, video, notation, text, and images to allow students to experience and learn music in a range of different ways. It also includes many solos, duets, and extended pieces that can be performed at home, at school, or in performances. Some of the students at this year’s Rhythm Explosion will be performing pieces from the text.

Although it was only released a few months ago, it’s already received praise from respected educators and performers in the U.K., the U.S., Australia, and Asia. It can be downloaded on to any iPad or Mac computer. People can find out more by visiting iBooks or iTunes here.

Want a front row seat at this year’s Rhythm Explosion? Tickets can be purchased here!

What impact has music played in your life? Drop us a line in the comments below and let us know. Also, don’t forget to like and share this article!

(All images courtesy of Michael Pignéguy and the Rhythm Explosion)