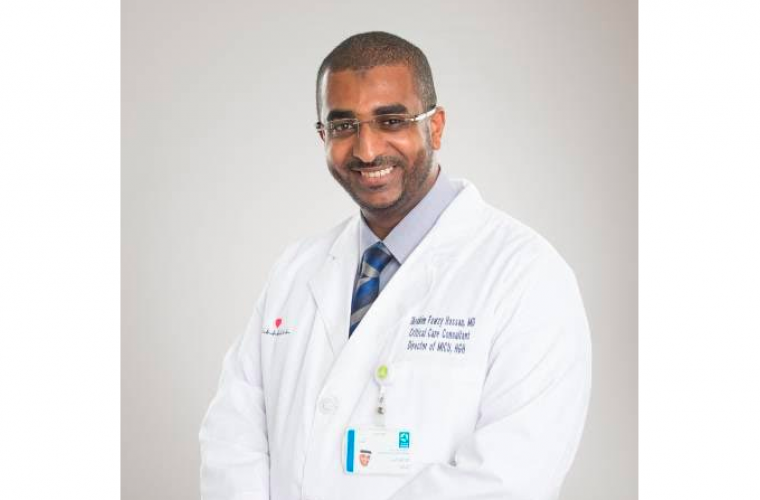 Since being introduced across Hamad Medical Corporation’s (HMC) network of hospitals two years ago, the Qatar Early Warning System (QEWS) has saved the lives of dozens of critically ill patients.

QEWS is a standardized approach to categorizing a patient’s severity of illness by using a scoring system that prompts medical intervention at specific trigger points. The system, which is adapted from an Australian model, acts as a safety net, identifying clinical deterioration in a patient’s condition and prompting specific action.

According to Dr. Ibrahim Fawzy Hassan, Director, Medical Intensive Care Division and Deputy Medical Director, Ambulance Service, QEWS was developed to help clinical staff recognize deteriorating patients before they become very sick. He said its implementation at HMC has had a real and meaningful impact.

“Early warning scoring systems like QEWS are widely used in hospitals around the world to track patient deterioration and to trigger escalations in clinical monitoring and rapid response. QEWS was developed in response to HMC’s need for a standardized and systematic approach to the early detection of patients whose condition was deteriorating,” said Dr. Hassan.

The early warning scoring system, which was introduced across eight HMC hospitals in November and December 2015, follows a definitive escalation plan that prompts nursing staff to request a medical review at specific trigger points, utilizing a structured communication tool and common language. The system was developed for Qatar as part of a partnership between the Hamad Healthcare Quality Institute and the Corporate Quality and Patient Safety Office at HMC.

“The system involves monitoring a patient’s vital signs to identify their likelihood of deteriorating. Should a patient show signs of deteriorating, the system triggers a warning so that care can be escalated. The system is being used across all HMC tertiary and general hospitals and has delivered substantial benefits to patients,” added Dr. Hassan.

According to Dr. Hassan, in addition to creating a standardized, systematic approach for the early detection, recognition, and response to deterioration in a patient’s condition, the primary goal of QEWS is to reduce the incidence of cardio-respiratory arrest rates outside of intensive care areas. He added that the system is built around five categories of patient groups; adults, children, newborns, maternity, and emergency patients. Dr. Hassan says it provides caregivers with the information they need to identify subtle signs of patient deterioration early, adding that the indicators of a patient’s clinical instability typically occur several hours before their condition worsens.

“Early detection of changes in a patient’s condition can make a life-saving difference. These changes commonly start 6 to 8 hours before the patient shows recognizable deterioration. Identifying patients at risk of deterioration and cardiopulmonary arrest and providing early intervention can reduce unplanned admissions to the Intensive Care Unit, inpatient cardiac arrests, and deaths,” said Dr. Hassan.

The importance of the early warning scoring system is underscored by the high number of patients cared for at Hamad General Hospital’s Intensive Care Unit, which receives upwards of 1,500 patients each year. Approximately 900 patients classified as critical trauma cases are also received at the Unit each year.

More details can be found online at http://ihimeforum.hamad.qa