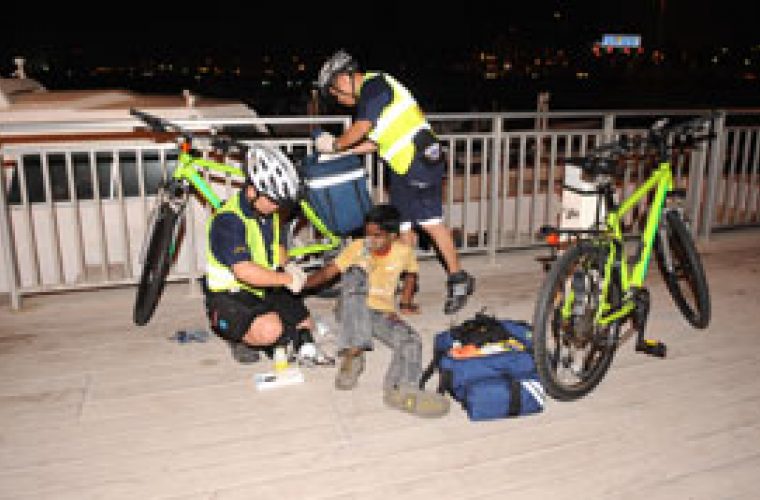 Weekend evenings along the Corniche are no longer the same for the numerous visitors to the area, thanks to the presence of emergency medical service (EMS) personnel. Moving on special bicycles fitted with portable automatic external defibrillator (AED) to be used in emergencies, the EMD personnel have invited the attention of many of those who throng the sea face. “We are at the service of the visitors who certainly are much more confident than ever before while on the Corniche these days. Our team enjoys helping them in the event of emergencies,” said Greandin Abanid, one of the two staffers on patrol. Abanid and his colleague Erniel Rodriguez cycle a 5.5 km stretchy. It has been more than four months since the EMS cyclists started duties at the Corniche. “Usually, we are in the area from Thursdays to Saturdays between 5 and 11pm, when crowds start arriving in large numbers,” said Abanid, who served in the Philippines marines prior to his coming to Qatar to take up employment in the EMS. In between he had a stint with the Philippines National Red Cross also. “In fact, it was the stint as an instructor with the Red Cross that changed my whole attitude to life and at once I decided to do something meaningful and very useful for those looking for help in the event of an emergency,” said Abanid. The job offer from Qatar came in 2006 and Abanid started with the local EMS in June that year. He said it is the training at Hamad EMS in cardio-pulmonary respiration that makes them so effective. “Using miniature versions of emergency equipment, we have been able to provide timely service to a few visitors to the Corniche in the last two months and among them the condition of one was a little worrisome when our team reached him. However, we have the satisfaction of saving him owing to timely EMS intervention. Since then, that person has been a good friend and occasionally calls us on mobile,” recalled Rodriguez. “We at EMS really feel honoured when he quite often refers us as to the friends who saved his life with a timely intervention,” he added. They expect to be very busy during Ramadan. The bicycle ambulance service is likely to be made available in the area every evening. They spoke of their appreciation for the counsel offered by Dr Robert Owen, who heads the EMS. “Dr Owen has confidence in our abilities and he is always in touch with us while we are on duty in the area,” said Abenid. http://www.gulf-times.com/site/topics/article.asp?cu_no=2&item_no=378026&version=1&template_id=36&parent_id=16