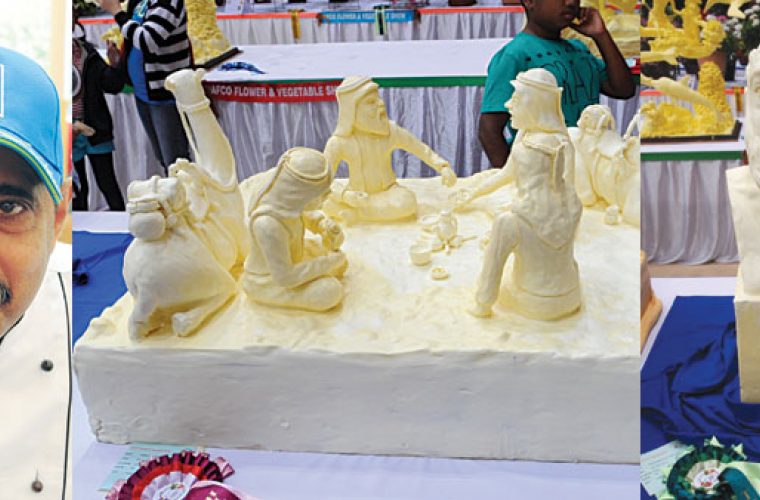 The participation of the catering team of Hamad Medical Corporation (HMC) emerged as a novelty from the hundreds of competitors who joined the Qafco Flower and Vegetable Show 2014 yesterday.

HMC executive chef (catering) Ferlyn Dias said this was the first time the medical facility had joined the sculpting competition, an integral part of the flower and vegetable expo.

For a group of first-timers, Dias said the creations by the HMC catering team had already earned accolades from the judges and organisers. He said that one butter carving exhibit was adjudged as “highly recommended” while another butter sculpture won the third place.

“Next year we’re going for gold,” said Dias who added that sculpting butter, fruit, or vegetable “is already in our DNA”.

According to Dias, HMC’s catering team is composed of professional chefs handpicked from five-star and six-star hotels.

“We are qualified culinary experts from five-star and six-star hotels and we take care of the catering needs at Hamad Medical Corporation,” Dias told Gulf Times.

With more than 12,000 meals served daily at HMC, Dias revealed that the atmosphere in the hospital kitchen packed a much-heightened excitement than in the kitchens of most five-star hotels.

Dias explained that cooking for hospital patients entailed special attention to strict dietary requirements in contrast to orders in a hotel.

He said a nutritionist prepared the daily dietary requirements of each patient and then passed on the information to the catering department.

“It is challenging to prepare and serve the food because of different menus and diets that we must follow,” noted Dias.

He added that HMC also served fine dining to select patients in the hospital’s private wards, particularly to those who request five-star cuisines.

He said the hospital’s participation in the event “is a good opportunity for the catering department of Hamad Medical Corporation to get exposure and to showcase our skills in carving, sculpting, and bread baking”.

Oganesian also said his team was looking forward to competing in the next edition of the Qafco flower show: “Winning the gold medal is our next step.”