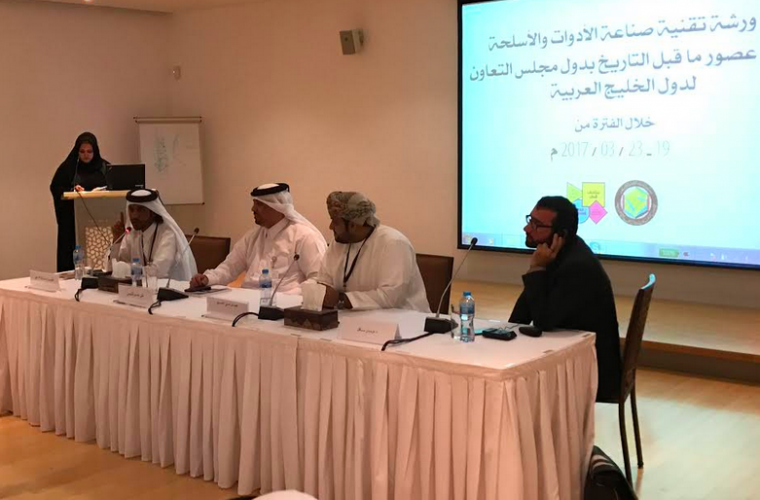 Under the patronage of its Chairperson, Her Excellency Sheikha Al Mayassa bint Hamad bin Khalifa Al Thani, Qatar Museums (QM) is running its second training programme for GCC archaeologists and museum professionals, that focuses on the techniques that were used to make tools and weapons in the Stone Age.

Running from 19 to 23 March 2017 at the Museum of Islamic Art (MIA), the training programme invites archeologists and museum professionals from the GCC to learn about the history of human settlement in the Gulf, dating back to the prehistoric period, by exploring the different uses of weapons and their importance in tasks including self-defense and food preparation.

The training programme, titled “Techniques of Making Weapons in the Stone Age”, aims to educate participants on the history of weapons and their development over thousands of years. Participants will gain useful insights into the history of people in the Gulf, as well as a deeper understanding of the history of the region.

In his welcome address, that was attended by Mr. Faisal bin Ali Al Hajri from the Secretary of the GCC, Ali Jassim al-Kubaisi, Chief Archaeology Officer at Qatar Museums, said:

“Programmes such as these are vital in developing the capabilities of GCC archeologists, as it will enhance their knowledge and unify their efforts in preserving the regions heritage and scientifically document it for upcoming generations.

“Studies have shown us findings from the Arab Peninsula that date back thousands of years. Through archeological missions, a lot of remains have been found on the Arab Gulf coast and inside the Peninsula itself. Among these findings, were Stone Age tools and weapons, which prove that the Arab region was occupied during the Stone Age. Therefore, exploring these tools reveal many aspects about our ancestors’ lifestyles and allow us to carefully document an important part of history.”

The five-day programme, which includes various lectures and activities, will be delivered by Mr. Faisal Abdullah Al Nuaimi,QM’s Head of Archaeology. It will cover the different weapons and tools used in the Gulf in the prehistoric period, including their uses, how to identify and categorise them, and how to classify the raw materials used to make them. It will also include training on making different types of weaponry and tools, soft and hard forging, trimming through forging or pressing, and how to make the most important tools, including axes, arrowheads and blades. In addition to the discussions, participants will visit and explore archeological sites across Qatar.

“Techniques of Making Weapons in the Stone Age” has been launched as part of QM’s commitment to implement the recommendations that were the result of the 16th Meeting of Archaeology & Museums Undersecretaries, held in Doha in 2015. The programme aims to enhance the mutual corporation between archeology and museum professionals in the GCC, and encourages collaboration that will help preserve the history of the Gulf. This initiative falls in line with QM’s goals to honour the traditions of the past whilst embracing the future.