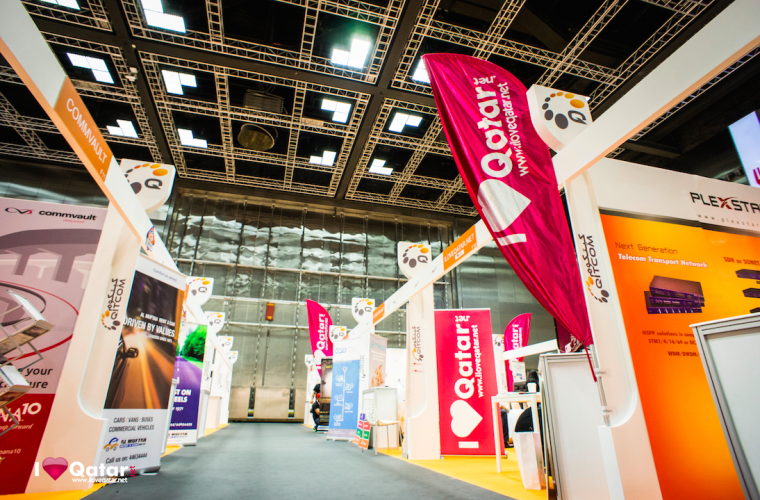 Organized by the Ministry of Information and Communications Technology and managed by fischerAppelt, Qatar, the event will be held for three days until May 28.

Speaking at the inauguration function, His Excellency Sheikh Abdullah Bin Nasser Bin Khalifa Al-Thani, the Prime Minister and Minister of Interior said the government is making every effort to build institutions that are based on effective resource management, excellent standards in productivity and efficiency to serve the public and that supports the development goals of the Qatar National Vision 2030.

He added: "There is no doubt that digital technology and knowledge have become important tools to achieve these development goals, including the role its plays in stimulating global economies .”

During his Speech, H.E. The Prime Minister and Minister of Interior expressed pride in Qatar’s achievements in the ICT sector. He said all the parameters point to a healthy and vibrant ICT sector in the State of Qatar.

“The progress made by the telecommunications and information technology sector in the country over the last few years is a result of the strong commitment by the government to give priority to this sector, as this is one of the key elements in the national development strategy. The efforts and investments along with the ambitious projects undertaken by the State in this area, is a testament to our commitment to boost this sector,” added His Excellency Sheikh Abdullah Bin Nasser Bin Khalifa Al-Thani, the Prime Minister and Minister of Interior

Her Excellency Dr. Hessa Al-Jaber, Minister of Information and Communications Technology while delivering her opening speech said the telecommunications sector the country has witnessed a remarkable growth of 11 percent over the last year , expected to continue growing at a rate of 9 to 12 percent over the next five years.

"We cannot complete the digital landscape in country without mentioning the vast amount of digital data that are now being used on a daily basis by individuals, institutions and companies and our dependence on technological devices.”

According to Her Excellency Dr. Hessa Al-Jaber all efforts should be made to harness the power of ICT, driving innovation well into the future, as an advanced ICT sector is crucial to a diversified economy. ICT supports all aspects of the nation’s development plan outlined in the Qatar National Vision 2030, and is essential to realizing the Qatari leadership’s vision – from sustaining economic prosperity to providing a high standard of living to all people who live and work in Qatar

Minister of Finance H.E. Ali Sharif Al Emadi in his keynote address said the information technology sector and telecommunications is one of the most important pillars of the Qatar National Vision 2030 due to its key role in facilitating the aim of building a knowledge-based economy.

He said, “The government under the guidance of His Highness Sheikh Tamim Bin Hamad Al Thani, the Emir of State of Qatar, has put a top priority to work to continue the process of sustainable development by focusing on the creation and development of an advanced infrastructure in all sectors, including information and communication technology.”

H.E Mr. Ali Shareef Al Emadi explained that this is evident in the state budget for the fiscal year 2014/2015 , where the allocations for implementation and completion of major projects amounted to about 40 percent of total expenses. “As you know the f information and communication technology is a key component in all of these projects. The best proof of the Qatar's interest in investing in Communications and Information Technology is the investment of QAR 2.5 billion for Qatar satellite company Es’hailSat that will enhance the country’s capability in the telecommunications sector and information .”

He added: "Given the importance of telecommunications and information technology in economic activity, has resulted in large investments in this sector. The GDP contribution from this sector has increased to QAR 7.5 billion in 2013 from QAR 5.5 billion in 2010.”

The third edition of QITCOM is especially important, as it features an exhibition, conference, awards, and competitions for entrepreneurs, contests for students, and other signature offerings aimed at reflecting aspirations and growth potential of the Qatari ICT sector.

The theme for this year’s QITCOM is “Innovating Today For The Future of Qatar” and hosts a selection of international speakers , regional and local , to discuss a number of key topics vital that relate to the promotion of innovation and entrepreneurial culture , and social networking and its impact on society , and the impact of satellite and broadband networks to broadcast media and digital content industry .

More than 100 leading ICT companies are participating in QITCOM this year, and more than 11 thousand visitors are expected to show up..

Over three days, will provide QITCOM 2014 significant opportunities for the leaders of innovation and policy-makers , technology providers and large enterprises in the field of communications and information technology to discuss the challenges in this area , and to support regional initiatives , and offer ideas and innovative strategies in order to achieve the Qatar National Vision to build a knowledge-based economy .

For her part, Rinal Chaaban, QITCOM’s Project Lead said: " We have worked hard over the past months out of conference and exhibition supervised by the State of Qatar and the information technology sector , given the role played by the sector in support of the " Qatar Vision 2030 " and the" National Strategy for Information and Communication Technology 2015 "in addition to infrastructure projects infrastructure of the state.

The first day of QITCOM 2014 focused on analyzing Qatar’s ICT reality including both the opportunities and challenges. It also discussed the role of ICT in boosting Qatar’s ability to fulfill the commitments of Qatar National Vision 2030, and what the country should expect from future initiatives by tackling a number of issues such as broad band internet, cyber security, satellites, communications, policies, as well as legal and regulatory frameworks.

Day one also discussed Qatar’s current and future ICT framework, examining issues like smart cities, ICT application in public utilities and services like traffic, sanitation systems, e-commerce, e-finance, and other government services, and suggesting ways to promote demand on this sector as a highly desired career choice in Qatar.