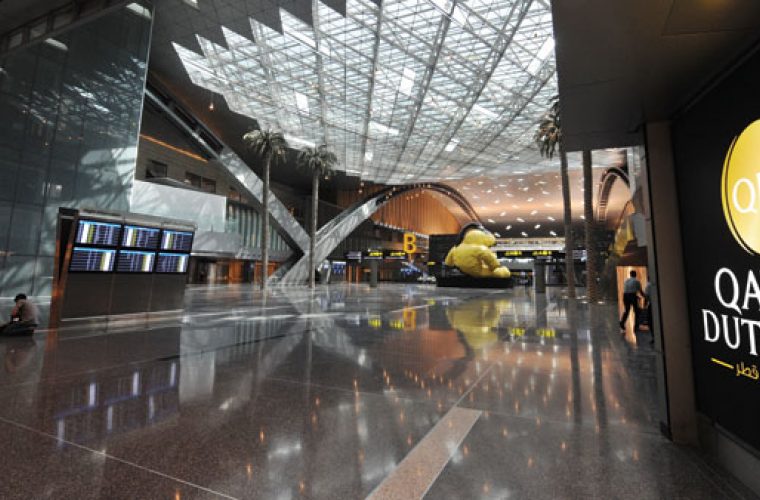 Although no definite date has been given for its eventual opening, Hamad International Airport (HIA) looks ready to dazzle the world with its futuristic architecture and cutting-edge facilities. During a media tour arranged yesterday, journalists were told that the total size of the “$15bn” airport spans 22sqkm, which is one-third the size of Doha city. Sixty per cent of it is built on land reclaimed from the Arabian Gulf. There is a dual runway system, including the 4,850m Eastern Runway and 4,250m Western Runway, which are 2km apart. It is estimated that up to 360,000 aircraft can use them annually, which is two and a half times more than the current airport. The state-of-the-art ATC system can handle 50 movements per hour on each runway. One of the officials informed that the HIA features a dedicated “sail-inspired” Emiri terminal for HH the Emir and his guests. “This building is built on 16,000sqm (that has) two levels. It can accommodate up to seven aircraft, including two A380s, and is surrounded by beautifully-designed man-made lagoons, interesting water fountains and water features.” The architectural highlights also include a stunning wave-inspired passenger terminal complex, a crescent-shaped Air Traffic Control tower and an aquatic-themed public mosque with a 2,000sqm glass dome and 36m-high minaret. The passenger terminal complex is expected to be able to handle 24mn passengers on its opening and up to 50mn in the final phase. There will be 138 check-in counters, of which 14 are seated check-in areas for Qatar Airways first class passengers, 16 for business class and 108 counters for economy. Top-notch security arrangements have also been made at the airport. A senior manager for airport security at HIA and the existing Doha International Airport said “a triangle of security partners, including the Ministry of Interior, the Qatar Airways group and Doha Airport Security, will work very closely together to ensure that passengers experience seamless and hassle-free check-in, passport control, transfers and boarding.” Around 50 passport control counters and 20 e-gates have been designed. In order to increase direct access between boarding gates and aircraft, 41 contact gates have been established that will increase to 65 upon completion of the final phase in 2015. The cutting-edge baggage handling system can deal with 19,500 bags per hour. Also, passengers will have the option of choosing from 80 retail outlets and 30 cafes and restaurants. In other notable features, the media was told that hangars at the airport were capable of accommodating up to 13 aircraft of different configurations, including five wide-body planes at any given time. http://www.gulf-times.com/qatar/178/details/370109/hia-looks-all-set-to-fly-high