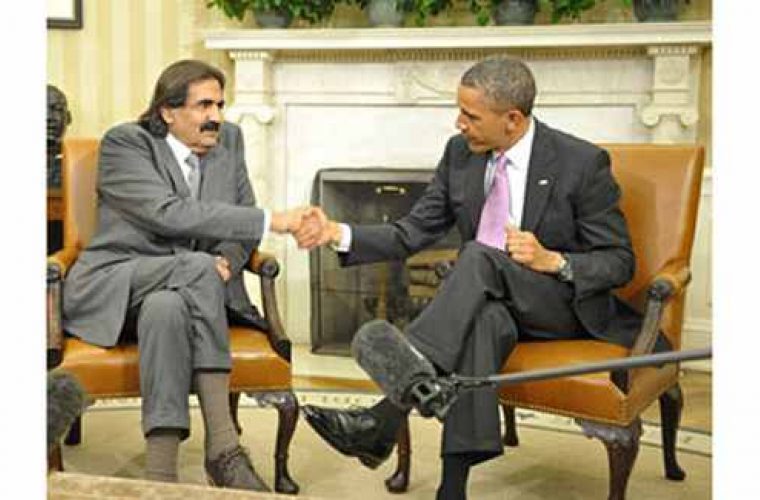 During the meeting, HH the Emir and the US President discussed bilateral relations between the two countries and ways of enhancing them in various fields. They also discussed a number of regional and international issues of common concern, the latest developments in the region, particularly the situation in Syria. The meeting was attended by HE the Prime Minister and Foreign Minister Sheikh Hamad bin Jassim bin Jabor Al Thani, and a number of Their Excellencies members of the official delegation accompanying HH the Emir. At the end of the meeting, HH the Emir expressed his pleasure for the meeting held with the US President, adding that the meeting touched on bilateral relations between Qatar and the United States whether in the military , educational, or economic spheres. HH the Emir cited as huge that changes that were happening in the Middle East , adding that the talks with the President covered a number of important countries, such as Egypt, where HH the Emir stressed that Egypt is “an important country in the Arab world as well as to the United States and at the same time (Egypt) is key to the peace treaty with Israel . ” HH the Emir said that it is important for the State of Qatar to see real peace between Israelis and Palestinians and the Arabs in general .. HH the Emir expressed hope that the Arabs and Israel would have good relations in the future after resolving the issue of the two countries and create a state for the Palestinian. HH the Emir also stressed that Qatar supports the peace process, hoping to see a just peace in the Middle East. The HH the Emir said the meeting also dealt with the situation in Syria, describing the Syrian situation as “a horrific tragedy” and suggested that current government “leave power” to stanch the bloodshed. HH the Emir said: “We hope to find a solution to stop the bleeding, and that the current government find a way out and leave the power to others who come to power to engage in the political game, I mean democracy in Syria. For his part, US President thanked HH the Emir on the occasion of his visit and praised the excellent relations between the two countries at all levels, referring to the military cooperation and trade and economic cooperation between the two countries. The US president expressed appreciation for the development of the State of Qatar on the level of education and health, noting the active and influential role of the State of Qatar in the region which is in harmony with the vision of the United States and its security and therefore international security. Obama said we talked about ending the “slaughter” in Syria, while touching upon Syrian President Bashar al-Assad’s disregard for his own people and his eventual “removal.” Obama said he urged Qatar to provide support for Palestinian Authority President Abbas in his negotiations with Israel in order “to bring about, in a timely fashion, a two-state solution.” The president also thanked HH the Emir for personally helping bring about a dialogue between the Taliban and the Afghan government. “These are all very difficult issues and neither of us are under any illusions that they will be solved overnight, but what we agree with is that if our two countries are communicating frankly … and pursuing common strategies that we can be a force for good for the entire region,” Obama said. Source : Qatar Chronicle