H.H. The Amir visits Madrid and receives the golden key to the city 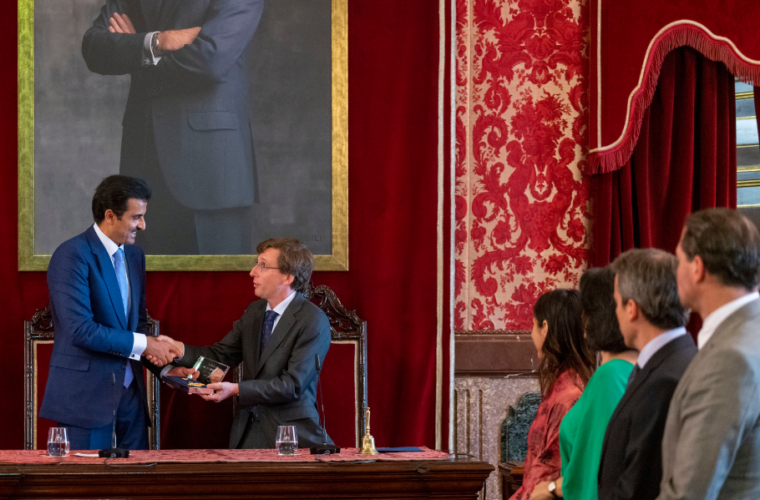 His Highness Sheikh Tamim Bin Hamad Al-Thani, the Amir of the country, paid a visit to the city hall of Madrid, Kingdom of Spain this afternoon.

Upon his arrival, His Highness was greeted by His Excellency José Luis Martínez Almeida, mayor of Madrid, and a number of Spanish officials.

At the beginning of the visit, H.H. the Amir expressed his pleasure to visit the Madrid city hall and meet the mayor, expressing his wishes to all for a time of success and for the city of Madrid to be more radiant and prosperous.

On his part, H.E. Mr. José Luis Martínez Almeida, mayor of Madrid, expressed his happiness with the reception of the city of Madrid for the Amir during the state visit in order to hand the Amir the golden key of the city as a symbol and an expression of gratitude and appreciation of the Spanish people to the friendly Qatari people, citing the success story of the state of Qatar, and that it has become a model to follow, noting the depth, friendship and harmony of Qatar.

The golden key to the capital Madrid was subsequently received by His Excellency Mr. José Luis Martínez Almeida, mayor of the municipality.

His Highness the Amir was accompanied by members of the official delegation.