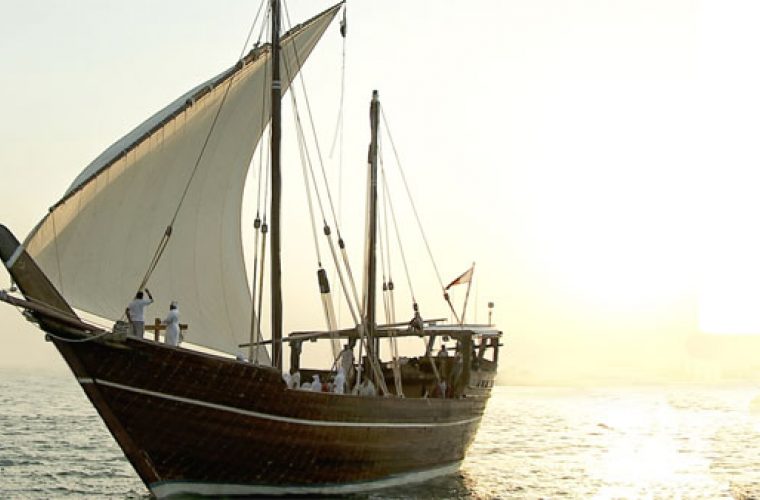 A 30-member team of Qataris, consisting of 16 experienced sailors, dhow repairers, cooks and other technicians left the country's shores today on a "Historic 44-day voyage" on the acclaimed dhow Fath Al Khair 2 to the Indian port of Mumbai from Katara Cultural Village.

The group members, sporting traditional costumes of Qatari sailors, were given a touching farewell from a specially erected enclosure near Gate 16 of the Katara beach, amidst singing of traditional Qatari folklore music by a group.
HE the Minister for Energy and Industry Dr Mohamed bin Saleh al-Sada, Indian ambassador Sanjiv Arora, Oman ambassador Dr Mohamed Nasser al-Wahaibi, Italian ambassador Guido de Sanctis, Palestine ambassador Munir Ghanim and a host of other guests including Katara general manager Dr Khalid bin Ibrahim al-Sulaiti were present.
The voyage, according to the organisers, stemmed from the penchant of the Katara in reviving the deeply rooted relationship of the citizens with the sea and whatever that entails related to customs and traditions.
Speaking at the ceremony, Dr al-Sulaiti, said “Katara's keenness to launch Fatah Al Khair journey stems from its commitment to embrace the genuine Qatari traditions and the country's rich heritage.
"The voyage is an illustration of the Cultural Village's transcendental mission of reviving the maritime heritage and spread awareness about the country's ancestors amongst the upcoming generation."
Dr al-Sulaiti also thanked the Qatar Museums and Qatar Gas Transport Company (Nakilat) for their logistic support to the sailors.
The voyagers will first reach Oman, and then to proceed towards India. The team, it is understood would reach Mumbai on October 15.
Speaking to Gulf Times, the captain of the team Hassan Essa al-Kaabi said the members will travel to some other destinations in India, including Kolkata, after anchoring the dhow in Mumbai. The return from Mumbai is on October 25.
"The voyage to India is significant as our ancestors used to travel through the same route and also reportedly had carried out the repairs of their dhows in Mumbai in ancient days," he recalled.
"Kolkata too had a prideful past in the ancient maritime traditions and we feel no voyage of this magnitude will not be complete without understanding the local traditions of the place."
On their return trip, they will spend 5-6 days in Muscat and then will concur in Doha on November 17, which will coincide with the launch of Katara's 5th International Dhow Festival to simulate traditional sea journeys.
Indian envoy Arora said “The journey can be perceived as a revival of the history and culmination of the deeply rooted ties between the state of Qatar and India.”
The ambassador said arrangements have been made to receive the dhow in Mumbai and officials of different departments will receive Fath Al Khair 2 on its arrival at the Gateway of India.
Fath Al Khair team manager Mohamed al-Sada also expressed the hope the voyage would generate considerable interest among the Qataris, other GCC citizens and also among Indians as it would be a unique journey taken out by the sailors as part of their interest to revive and demonstrate an ancient tradition of this region.
As the Fath Al Khair was berthed more than 200m away from the Katara shores, owing to the shallow waters near the beach, the sailors boarded two smaller boats prior to their voyage to reach the dhow.