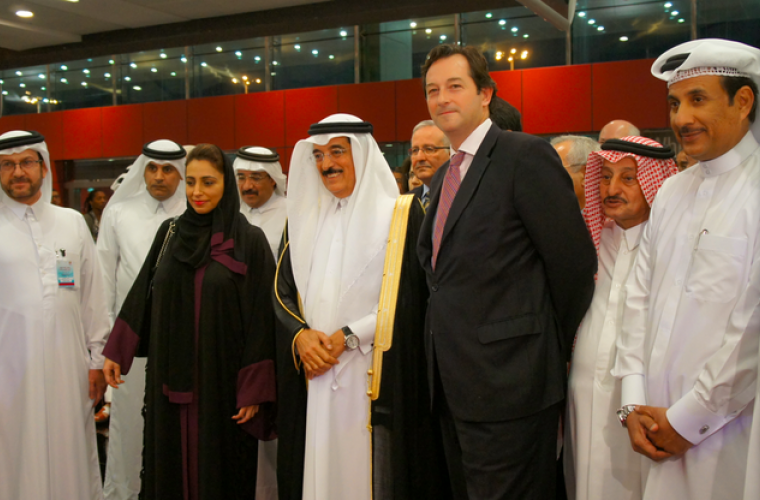 His Excellency Dr. Hamad bin Abdulaziz Al Kuwari, Minister of Culture, Arts and Heritage inaugurated the 24th Doha International Book Fair at the Doha Exhibition Centre today. The Book Fair will be one of Qatar UK 2013 Year of Culture’s last events and will remain open until the 14th of December. This year the United Kingdom (UK) is the guest of honour at the Doha International Book Fair. The UK pavilion and its partners will organise several activities and workshops for families, children and book enthusiasts. Director of the British Council, Martin Hope, said: “On behalf of the British Council and the Qatar UK 2013 Year of Culture, I extend our deep gratitude to His Excellency the Minister of Culture, Arts and Heritage, His Excellency Dr. Hamad Bin Abdulaziz Al-Kuwari, for his support, enthusiasm and for this great honour. Education is a key pillar of Qatar’s National Vision for 2030 and the exchange of knowledge and ideas between British publishers and writers and their Qatari counterparts furthers the purpose of the Year of Culture by strengthening ties for years to come.” The British Council and Bloomsbury Qatar Foundation Publishing, in partnership with the British Centre for Literary Translation, will host The Literary Translation Summit. The summit will bring together thirty-six writers and translators for an intensive week of literary translation workshops and panel discussions. Two workshops will focus on translations from English to Arabic, and a third will focus on Arabic to English. Marilyn Booth will lead the Arabic to English workshop, with Hassan Daoud as author. Zeinab Mobarak will lead the first English to Arabic workshop, with Nadifa Mohamed as author and Nariman Youssef will lead the second English to Arabic workshop, with David Szalay as author. The summit will also include a panel discussion on translation of Shakespeare’s works as well as a discussion on life as a literary translator and resources for translation, including national translation organisations in the United Kingdom and Arab world. Arend Kuster, Director of Bloomsbury Qatar Foundation, said: “We are delighted to participate with Qatar UK and the British Council during the book fair. The broad range of activities showcases how our publishing initiatives touch many people - from story times for children to panels for high-level academics. Because Bloomsbury Qatar Foundation is a unique partnership, we are able to weave our literacy activities into the fabric of everyday life in Qatar and beyond.” The Publishers Association, the Qatar Ministry of Culture, Arts and Heritage, British Embassy and the British Council are bringing five UK editors to Qatar including: Judy Pearsall, Editorial Director at Oxford University Press; Sophie Buchan, Commissioning Editor for Orion Books; Rona Selby, Editorial Director for Andersen Press, an imprint of Random House; and Lynn Gaspard, Publisher from Saqi Books. During their time in Doha they will meet Qatari editors to discuss opportunities for future collaboration. For the first time, on December 6th, Qatari novelist Abdulaziz Al Mahmoud will discuss the historical context of his translated work, The Corsair, with an expert on the region, Dr. Abdullah Baabood. The novel is set against the backdrop of an important period in history for the Arabian Peninsula and British Empire. For families and children, the British Council will have renowned UK guest storyteller Alec Williams engaging and entertaining primary school classes with his repertoire of stories in the ‘Learn English Kids’ zone and ‘Maktaba Storytelling Time’, in English and Arabic. WH Smith part of Al Meera mother company, has supported the reading activities and provided more than 200 books titles out of 500 UK titles. Coinciding with the fair is an innovative exchange initiative called Walking Cities: Doha and Derry Londonderry. Walking Cities pairs two writers from different cities to exchange ideas, share their work, and immerse themselves in the culture and writing of a foreign city. In this edition, award-winning poet Colette Bryce, from Derry Londonderry, is hosted in Doha by poet Maryam Al Subaiey, who will make her trip to visit Colette in the UK in February. On December 8th at the fair, both writers will share and discuss their experiences from the first leg of their creative journey in Doha. Additionally, guests who did not have the chance to visit Ben Barbour’s exhibition showcasing his journey from Qatar to the UK aboard an LNG vessel, will have the opportunity to do so at the fair’s UK pavilion. - ILQ News -