H.H. The Amir re-elected as member of International Olympic Committee 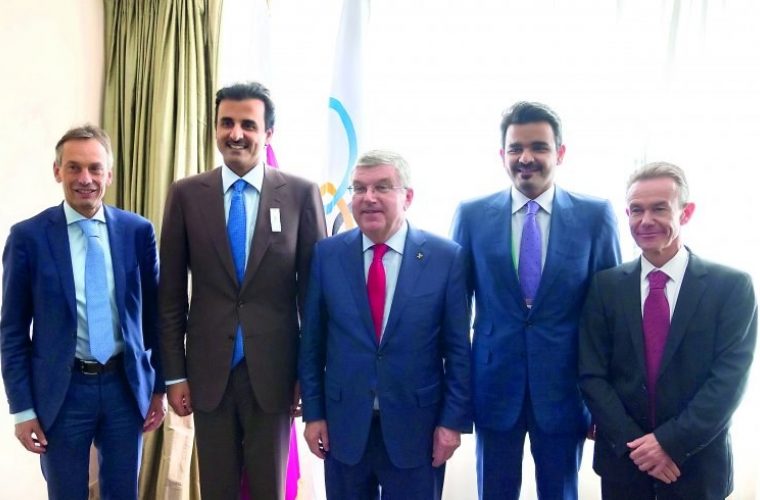 H.H. The Amir Sheikh Tamim bin Hamad Al Thani has been re-elected as a member of the International Olympic Committee (IOC) during the IOC session in Buenos Aires, on the sidelines of the Youth Olympic Games.

H.H. the Amir also participated in the meetings of the 33rd session of the IOC on Monday, which dealt with a number of topics on the agenda related to the development of sports work and the Olympic movement at the global level.

H.H. the Amir met with President of the International Olympic Committee Dr Thomas Bach, on the sidelines of the Youth Olympic Games in Buenos Aires, Argentina.

The meeting dealt with the relations of cooperation between the State of Qatar and the International Olympic Committee and means of enhancing and developing them.

In this regard, Dr Bach praised the friendly relations between the two sides, and the great role and initiatives undertaken by the State of Qatar in promoting the dissemination of the Olympic movement worldwide, including the support of the State of Qatar represented by the Qatar Olympic Committee to the Olympic Refuge Foundation, which was established in September last year in a joint cooperation with the United Nations High Commissioner for Refugees.

H.H. the Amir stressed the keenness of the State of Qatar to support refugees around the world at various levels in terms of providing the necessary facilities to exercise in safe environments for those forced to leave their homes due to crises, wars, famine, and other natural disasters. His Highness also expressed thanks and appreciation for the efforts exerted by the Olympic Refuge Foundation in the establishment and rehabilitation of sports facilities for refugees in more than 50 countries across the world.