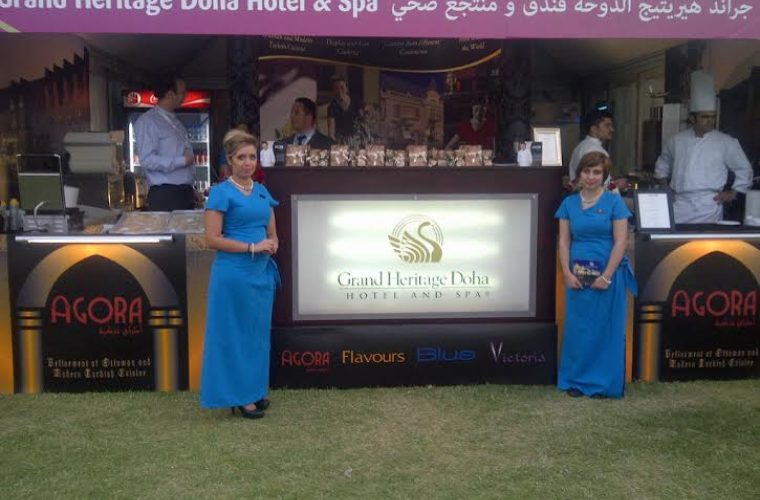 Grand Heritage Doha Hotel and Spa has announced it will be participating in Qatar’s upcoming International Food Festival. The hotel’s popular restaurant, Agora will be offering some of its specialty dishes for guests to taste in celebration of Doha’s 5 star-dining and healthy foods.

The Qatar International Food Festival will commence on March 20th 2014 at the Museum of Islamic Art Park, and will last for three days. The festival intends to celebrate Doha’s fine 5 star dining through its top restaurants, all prepared by internationally renowned chefs. Divided into regional themes, the Grand Heritage Doha Hotel and Spa will present Agora in the European section, where it will be offering new Turkish delicacies.

Agora has gained its reputation rapidly for enticingly melding different regional Turkish recipes into dishes that offer new flavors. Professionally prepared by the restaurant’s talented Chef de Cuisine, Emre Gok, Agora brings out an intense and often unusual contrast that can be characterized by a complex and exotic blend of spices. Guests will be able to enjoy the restaurant’s incorporation of healthful grains, vegetables and lean meats that match one of the festival’s major themes for the year: healthy food.

Commenting on the hotel’s participation, Mr. Zeid Talhami, Director of Sales & Marketing said “The International Food Festival has become an increasingly important event, particularly in the past few years. Qatar’s local and expatriate population has grown significantly, opening doors to embrace different culinary traditions and appreciation for international flavors. This will be a wonderful opportunityfor people to share and experience international food together and Grand Heritage Doha Hotel and Spa is delighted to show its participation by bringing modern Turkey right to you. Agora will be offering guests to taste its specialty dishes, exclusively prepared by Chef Emre Gok. We will be looking forward to hearing guests’ feedback and hope the festival will be a major success as it always has been”.

The delectable dishes featured on the menu are based on traditional Ottoman recipes inspired by rich cuisines from the Balkan, Mediterranean and Middle Eastern regions as well as contemporary Turkish cuisine. Of the menu items offered, there will be Kisir, Cacik, Hunkar Begendi, Pilav and Bklava. There will also be a waffle and ice cream stand provided, all to enjoy along with the festival’s celebrative atmosphere.

The Grand Heritage Doha Hotel and Spa is part of the Grand Heritage Group, a chain of luxury hotels around the world. It opened its doors in Doha in mid 2011 and is located by the Aspire Academy for Sports Excellence. The hotel has since been an important presence in the hospitality industry in Qatar, both aesthetically and by measure of its services.