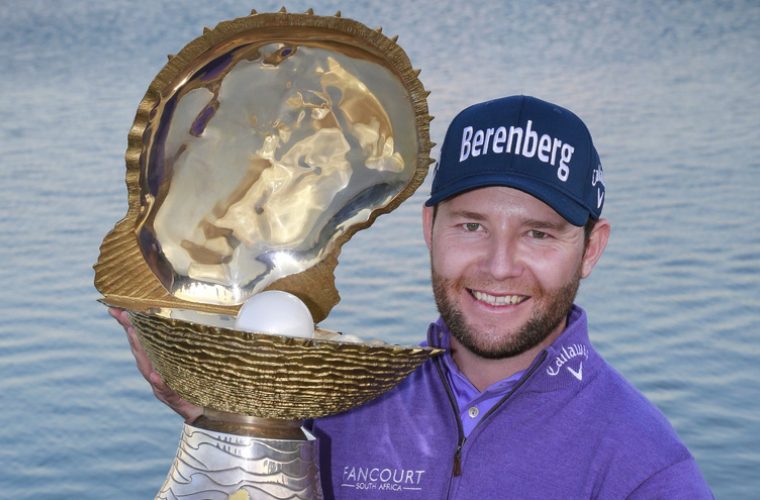 World No. 11 Branden Grace became the first player to retain the Mother of Pearl Trophy – and then promised to come back to Doha to attempt a hat-trick

Saturday, 30 January 2016. Doha, Qatar: Branden Grace made history by becoming the first player to successfully defend his title at the Commercial Bank Qatar Masters – and then promised to come back to Doha Golf Club in 2017 to attempt a hat-trick.

Playing in the last group on Saturday, the World No. 11 birdied the 18th for a closing three-under-par 69 and a 14-under total of 274, finishing two clear of playing partner Thorbjorn Olesen (71) and Rafa Cabrera-Bello (70).

English duo Andrew Johnston (70) and Lee Slattery (70), and Welshman Bradley Dredge(69) tied for fourth on 11-under, while World No. 12 Sergio Garcia (70) andWorld No. 18 Louis Oosthuizen (71) were among six players to share seventh spot on eight-under.

Overnight leader Paul Lawrie, bidding to become the tournament’s first three-time winner, dropped to a tie for 13th after a 78.

The day belonged to Grace, who led by two shots for most of his back nine and secured matters with a tap-in birdie at 18, where Olesen also picked up a shot and a late-charging Cabrera-Bello earlier secured a third straight birdie to set a target.

“It's great. It's awesome. I'll say this: I'm definitely coming back!” Grace said.

“It's a big thing to come to a week defending. You've got a lot more pressure and a lot more things going on that week. But to get the first proper defence under the belt is something great and something I've been dreaming of.

“There's no better place to do it than Qatar. This was really one of my biggest wins to date last year and I think this is just going to push it up even higher.”

Grace then looked again at the Mother of Pearl Trophy. As well as his own and Major winners Scott and Lawrie, other names on the trophy include four-time Majorwinner Ernie Els, two-time US Open champion Retief Goosen, seven-time Ryder Cup star Sergio Garcia and former World No. 2 Henrik Stenson.

“There are some great names on the trophy, a lot of big names, so I feel privileged to be able to get my name on there twice in a row. It’s a great feeling, my first successful defence. This is special. It's definitely getting myself over another hurdle.”

Grace said before the tournament that he was a better player than at this time last year – and the statistics bear that out.

Last year, he became a regular contender at the Majors, finishing fourth in the US Open and third behind Jason Day and Jordan Spieth in the US PGA Championship. In October, he won all five of his matches against the USA at the Presidents Cup in Korea.

On The European Tour, he has now recorded top-five finishes in his last four events and has top 10s in his last six. In his last 16 events, he has only finished outside the top 20 twice.

“It's all a big learning curve as your career goes on. I've learned a lot this week for myself, learned patience, and I've learned what it takes now to defend a title. And not just that but to win a title again. It happened last year, but it feels long gone, so it's great to be in the winner's circle again,” Grace said.

“I just told myself, if I play the same type of golf that I played yesterday, I should be there or thereabouts. It's brutal conditions out there. You can't really force things to happen. You just need to stay patient and let it happen. I did that really well yesterday and it worked to my advantage and I did the same today.”

Grace, competing in his fifth straight Commercial Bank Qatar Masters, and Olesen started the final day at 11-under, two shots behind Lawrie.

Grace birdied the first and bogeyed the fifth, but after a birdie at the sixth hole, which Lawrie bogeyed, all three players in the final group were level at 12-under.

Lawrie’s challenge further unravelled with a double bogey at nine and when Grace birdied 10, the defending champion held a two-shot lead that cushioned him for the rest of the round.

Grace said he felt most threatened when Olesen had a birdie chance at the par-four 16th, but the Dane failed to convert.

“I think maybe it went my way a little bit. If Thorbjorn made birdie on 16, then it's a different story again because then you're going down the last with a one-shot lead, and you know anything can happen on 18, especially with that pin position. You get the guy going for it, make eagle,” Grace said.

“It's happened before with Chris Wood. It's one of those holes where you can't really just get too comfortable that you've done it. But I thought I gave myself a good chance when I hit the green in two and I knew pretty much, this is done for.”