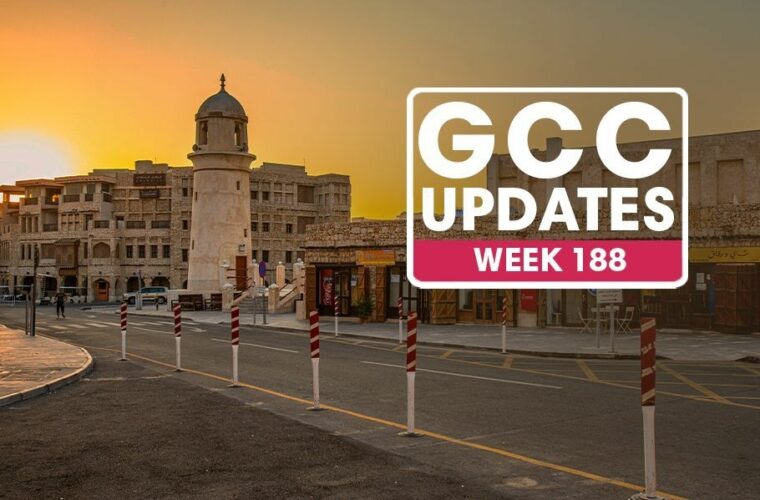 Every Thursday, we'll be bringing you the latest GCC updates. Here's what happened in Week 187.

Etihad Airways and flydubai to resume flights to Doha

Effective 15 February 2021, Etihad Airways will recommence passenger flights from Abu Dhabi, the capital of the United Arab Emirates, to Doha, Qatar, subject to the applicable government approvals. The service will operate daily using an Airbus A320 and a Boeing 787-9 Dreamliner, according to an Etihad Airways press release.

Similarly, From 26 January 2020, UAE budget carrier flydubai will resume flights to Doha with a double daily service. Flights can be booked from today, 21 January 2021 on flydubai.com.

In an official Press Release, the Egyptian Ministry of Foreign Affairs announced that Qatar and Egypt agreed on resuming diplomatic ties between them. The statement read:

“Arab Republic of Egypt and the State of Qatar exchanged, today, January 20, 2021, two official memoranda, in virtue of which the two countries agreed to resume diplomatic relations.”

Today, Qatar suspended the case it had registered against the United Arab Emirates (UAE) at the World Trade Organisation (WTO). According to Qatar, the UAE had taken measures that were designed to economically isolate Qatar, and a three-person panel from WTO was to decide on the case in the first quarter of 2021, according to a report by Reuters.

The suspension was announced in a document filed at the WTO on Tuesday 19 January 2021,

Qatar's Foreign Minister His Excellency Sheikh Mohammed bin Abdulrahman Al-Thani told Bloomberg that Qatar has urged the Gulf Arab nations to enter into a dialogue with Iran saying that it was the right time for Doha to broker negotiations, now that things were getting better with its Gulf Cooperation Council (GCC) neighbours.

"This is also a desire that's shared by other GCC countries."

Reuters reported on Monday night that channel beIN Sports has now been allowed to broadcast in Saudi Arabia, in the aftermath of the end of the blockade against Qatar.

"It was unclear if the ban was officially lifted but several cafes and restaurants in the capital Riyadh were using satellite dishes to show games of the Premier League on beIN Sports channel."

The Saudi government’s media office did not immediately respond to Reuters request for comment on whether the policy had changed.

However, a spokesperson of BeIN Media Group has said in a statement sent to Reuters that BeIN's website is still fully blocked in Saudi Arabia and they haven't received official communication from Saudi authorities stating that their license has been re-instated.

“Nothing has materially changed as far as we are aware at this stage - we are constantly monitoring. Our website is still fully blocked in Saudi Arabia and we have received no official communication from the Saudi authorities to suggest that our license has been re-instated. However, like everyone, we are hopeful of positive moves by Saudi to allow beIN operations back in the country after 3.5 years. We await to see.” - beIN

Bahrain revokes ownership of 130 properties of relatives of H.H. The Amir of Qatar

Bahrain's Ministry of Works and Urban Planning announced the acquisition of properties belonging to the sons of Khaled Nasser Al-Misnad, the uncle of the H.H. The Amir Sheikh Tamim bin Hamad Al Thani, according to what was published by the country's Official Gazette and reported by Al-Hurra.

This decision comes amid tensions between Manama and Doha on various issues, including the issue of fishermen, which took a large space in the Bahraini media, despite the signing of the Al-Ula agreement.

Page 106 of the latest issue of the Official Gazette of the Kingdom of Bahrain (No. 3506) showed an advertisement for the Ministry of Works and Urban Planning stating that it had acquired 130 properties owned by Muhammad, Sara and Al-Dana, sons of Khaled Nasser Al-Misnad, brother of H.H. Sheikha Moza Al-Misnad and his father, Prince Tamim.

The acquisition of these real estates

"is based on the powers vested in it (the ministry) under Law No. 29 of 2009 regarding the acquisition of real estate for the public benefit," as this comes "in order to expand government facilities as requested by the Ministry of Interior."

The government announcement is considered an official notification to the owners to review the Acquisition and Compensation Department in the Bahraini Ministry, according to the Official Gazette.

Saudi Embassy will reopen in Doha within a few days: Saudi FM

According to the Anadolu Agency, Saudi Foreign Minister Prince Faisal bin Farhan told a press conference earlier today in Riyadh that Saudi Arabia would be reopening its Embassy in Doha very soon:

“Our embassy will be reopened in Doha within days after completing necessary procedures." (Anadolu Agency)

In a post on the Qatar Airways Twitter account, it announced that the airline is resuming services to King Abdulaziz International Airport with four weekly flights to Jeddah, Kingdom of Saudi Arabia.

The airline earlier resumed flights to Riyadh on 11 January and will resume flights to Dammam on 16 January.

Air Arabia in a Tweet announced that it will resume direct flights to Qatar from 18 January 2021. The carrier will run daily flights between Sharjah and Doha.