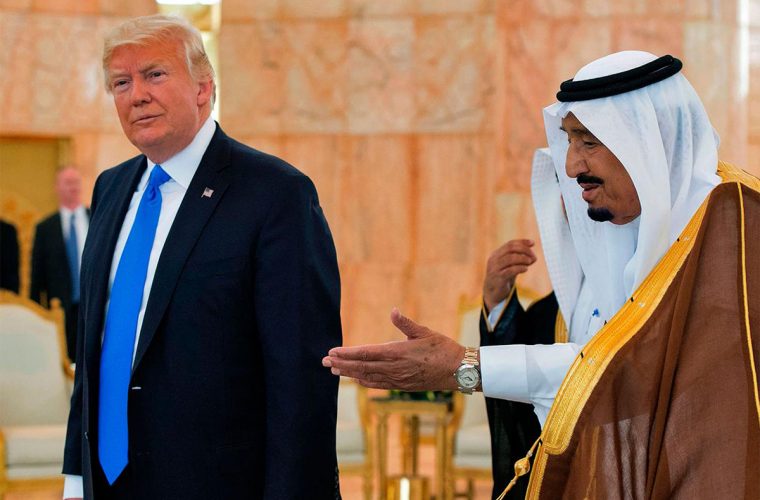 Qatar's emir began his official US tour with a meeting at the US Central Command (CENTCOM) headquarters in Tampa, Florida.

Twitter mocks Saudi plans to turn Qatar into an 'island'

Twitter users in the Middle East have mocked a Saudi plan to develop a maritime channel along the Saudi-Qatari border, saying it will never see the light of day.

Saudi newspaper Sabq reported on Thursday that the project, which is still awaiting official approval, involves the construction of a maritime channel between the Saudi regions of Salwa and Khawr Al-Udayd .

The newspaper said that a 1km stretch of land north of the canal, bordering Qatar, would become a "military zone", permanently ending land trade between the two Gulf countries.

The ongoing Gulf crisis will not be on the agenda of the Arab League summit planned in Riyadh in mid-April, a spokesperson for the Qatari foreign ministry said.

In statements to the Turkish state-run news agency Anadolu on Saturday, spokesperson Lolwah al-Khater said Qatar had received an official invitation from Arab League Secretary-General Ahmed Abul-Gheit to attend the summit in the Saudi capital on April 15. Doha has not yet decided on its representation level at the summit, she said.

HH the Emir Sheikh Tamim bin Hamad Al-Thani, and HE US Defense Secretary, James Matisse discussed strategic, defence, military and security cooperation between the two countries and means of developing and expanding them.

During the meeting, which was held at the US Department of Defense (Pentagon), on Monday morning, HH the Emir and HE the US Defense Secretary reviewed the two countries' joint cooperation in combating terrorism and its causes.

the US Defense Secretary also expressed Qatar's commitment and support for security and stability in the region. He expressed his thanks and appreciation to HH the Emir for the important role of Qatar in the fight against terrorism through Al Udeid Air Base.

President Trump meet with Qatar’s emir in the second step of a planned three-part diplomatic push to resolve a bitter dispute in the Persian Gulf region. The crisis erupted in June 2017 when Bahrain, Saudi Arabia and the United Arab Emirates (plus Egypt) severed diplomatic and economic ties with Qatar.

Qatari Emir told reporters the region could not tolerate “a war criminal” like Syrian President Bashar al-Assad and he said the region cannot accept people who support terrorism. The two leaders spoke as the U.S. prepares to respond to a suspected chemical weapons attack in Douma, Syria.

In a telephone call this month with Saudi Arabia’s King Salman, President Donald Trump demanded that the kingdom and its Arab partners quickly end a nearly year-old dispute with Qatar that has left U.S. allies in the region fractured, according to two U.S. officials briefed on the conversation, Reuters reported. Trump’s tone in the April 2 call with Salman was described by one official as “forceful.” It was not clear what the king’s response was.

What are your thoughts on these latest developments in the ongoing GCC Crisis? Drop us a line and tell us your thoughts in the comments below, and don’t forget to like and share this article!