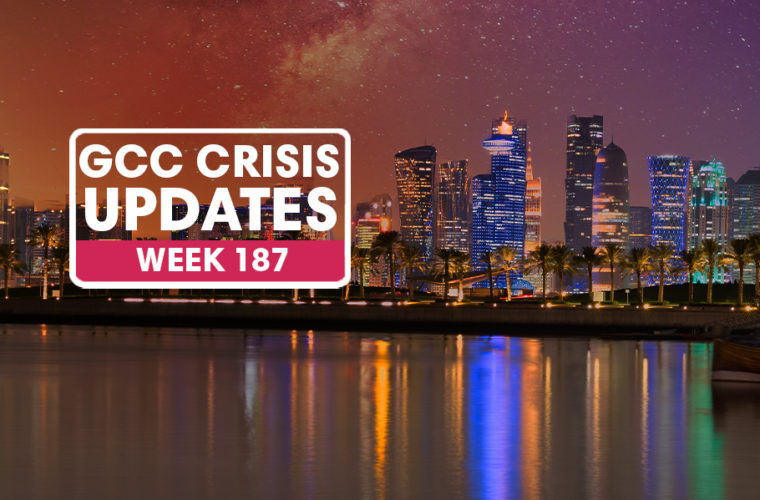 Qatar Airways announced it would resume flights to Egypt, starting with services to Cairo on 18 January 2021, followed by Alexandria on 25 January. The airlines will start with a daily service to Cairo, and twice-weekly flights to Alexandria.

Former UAE government advisor ready to visit Qatar, appear on Al Jazeera, but with a condition

On his Twitter account, AbdulKhaleq Abdulla, the professor of Political Science and former advisor to the United Arab Emirates government, posted a status that he is "ready to visit Doha on the nearest Emirates flight to check on family and meet colleagues" to renew the ties of brotherhood and renew the mutual affection both countries have for each other. He is also willing to appear on the Al Jazeera Media Network for an interview with Ghada Oueiss if she withdraws the legal cases she has filed against the Abu Dhabi Crown Prince Mohammed bin Zayed and the Saudi Crown Prince Mohammed Bin Salman for a 'hacking and leaking' operation.

This was AbdulKhaleq Abdulla's response to a Twitter status by Ghada Oueiss in which she asked the professor if he would appear on her channel for an interview with her once again, now that the blockade was over and borders open.

EgyptAir is all set to fly to Doha

The first round-trip flights to be operated by EgyptAir to Doha will start next Monday on 18 January 2021, according to a report on the Lusail News website.

The decision to operate EgyptAir between Qatar and Egypt comes at a time when the Egyptian civil aviation authorities announced the reopening of the Egyptian airspace which had been closed to Qatar Airways since 5 June 2017.

Egypt opens airspace to Qatar following the lifting of the blockade. Previously, Saudi Arabia, the United Arab Emirates and Bahrain had opened their airspaces to Qatar. According to Egyptian daily Al Ahram Gate, Engineer Ashraf Noyer, head of the Civil Aviation Authority, said that Egypt officially lifted the ban today, on Tuesday.

Qatar has been added to Abu Dhabi's updated list of countries and destinations from which travelers can enter the emirate without the need to go into quarantine, according to The National News.

In the list updated on January 9, 2021, the 'green list' includes Oman, Saudi Arabia, and Kuwait aside from Qatar. Arrivals from the countries, regions, and territories in the list are exempt from quarantine requirements and can enter the destination by following a series of procedures that include COVID-19 tests. The list is updated every two weeks.

The Civil Aviation Affairs (CAA) In Bahrain at the country's Ministry of Transportation and Telecommunications announced yesterday that Bahrain’s airspace will now be open for Qatar-registered aircraft starting Monday, 11 January 2021 (00:01 GMT), based on established procedures, according to the Bahrain News Agency.

On the Qatar Airways Twitter account, the airline said they were requesting any former employees in neighbouring countries to get in touch as they build their operations

Read more here: Qatar Airways calls on former employees in neighboring countries to get in touch

Bahraini Foreign Minister says ties with Qatar will return to what it was before June 5, 2017

Speaking in an interview broadcasted by the Bahraini media, Bahraini Minister of Foreign Affairs, Dr. Abdul Latif Al Zayani, said that the ties with Qatar will return to what it was before June 5, 2017. This comes after the signing of the Al-Ula agreement at the 41st GCC Summit. He also mentioned that the parties would end the security and political issues through bilateral talks, mentioning that two follow-up committees and one legal committee will be formed to implement what is agreed upon, according to the Al-Sharq website.

Saudia, Saudi Arabia's national airline, tweeted on their official Twitter account saying that you could now book flights between Saudi Arabia and Qatar starting from Monday, 11 January 2021 on their website saudia.com.

Qatar Airways announced in a tweet on its official Twitter account saying that it will resume flights to Saudi Arabia, starting with services to Riyadh on Monday 11 January 2021, followed by Jeddah on Thursday 14 and Dammam on Saturday 16 January.

UAE to reopen all land, sea and airspace with Qatar on 9 January 2021

The Emirates News Agency tweeted that all the entry points of land, sea, and airspace would open on 9 January 2021. According to the official statement, Khalid Abdullah Belhoul, Undersecretary of the UAE Ministry of Foreign Affairs and International Cooperation, announced that the UAE would begin to end all measures taken against Qatar according to the statement issued on 5 June 2017, following the signing of the Al-Ula Declaration.

UAE is the second country after Saudi Arabia to open back to Qatar after the 41st GCC Summit on 7 January 2021.

Qatar Airways begins to reroute some flights through Saudi airspace

Qatar Airways in a Tweet mentioned that this evening, it began to reroute some flights through Saudi airspace with the first scheduled flight QR 1365, Doha to Johannesburg at 20.45 on 7 January 2021.