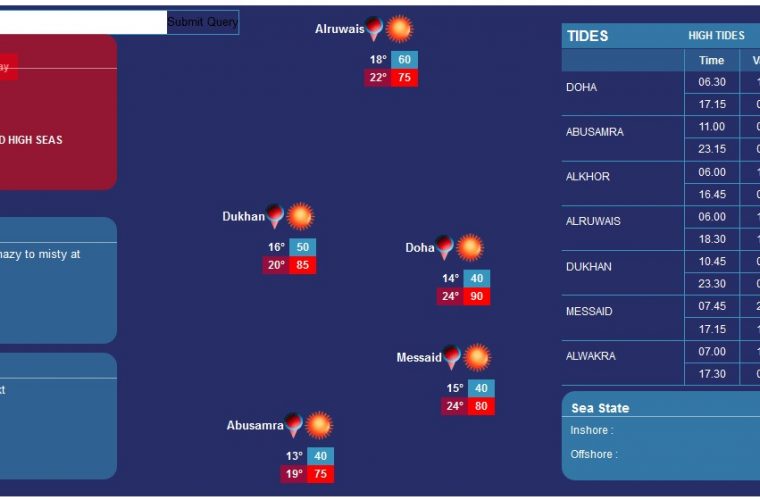 The Meteorology Department has forecast a fresh spell of cold and windy weather from today. And it could rain on Sunday with strong chances of a wet weather, particularly on Monday and Tuesday. The department, however, didn’t say if it would rain only in the northern parts of the country or all over, but added rains could last until the end of the week. Beginning today, the air could be chilly as a ridge of high pressure builds over the region, extending from the northwest of the Arabian Peninsula, the forecast said. The phenomenon could be associated with a mass of cold air in the upper air levels, which would cause chill. Weather will be partly cloudy to cloudy with chances of dust being swept across the country by strong winds. What would cause the above weather conditions is the winter solstice (when the sun is the farthest from the edge of the earth’s equator) that falls between December 20 (today) and 23. The solstice will lead to a fresh spell of cold weather when day temperatures could drop to between 18 and 20 degrees Celsius, while the night could be colder with the mercury dipping to 11 to 14 degrees in some areas of the country. The wind direction will be northwesterly (from the colder regions of Europe) with speeds that could at times cross 35 to 40 knots. Today, day temperatures are expected to be 23 degrees in Doha, 24 in Al Wakrah and Messaieed, while Dukhan and Abu Samra would witness 20 degrees. Minimum temperatures forecast for Doha is 15 degrees, while the night could be colder in Al Wakrah and Messaieed with the temperature dropping to 14 degrees. Night temperatures are likely to be 17 and 16 degrees in Dukhan and Abu Samra. Strong northwesterly winds could top 40 knots offshore, and 25 to 35 knots inland, according to the forecast. http://thepeninsulaqatar.com/news/qatar/265221/fresh-cold-spell-rains-likely