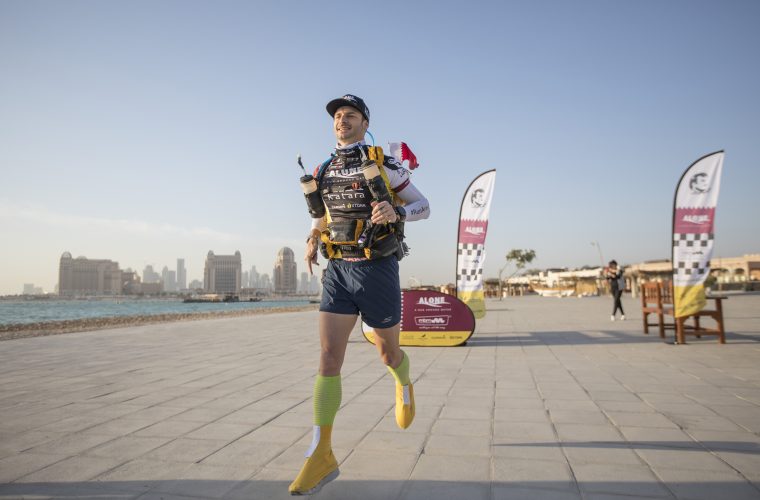 It was another typical Sunday morning in Katara Cultural Village until fitness guru Pierre Daniel flexed his toned physique, weighed his bag, and greeted media for a quick press conference before embarking on the ambitious feat of circumnavigating Qatar on foot, without any assistance, over the course of 7 days.

Pierre's 7-day trek through the unpredictable terrains of Qatar -- which is being done under the patronage of HH Sheikh Tamim -- can be followed via a unique tracking portal developed by Aspire Zone’s IT team, which will show live-tracking of Pierre’s progress, including distance covered, speed, heart-rate, and more.

Pierre was wished well by family, friends, sponsors and staff at Katara, while he also entertained quick questions from the press and photographs with fans and spectators.

With a route covering approximately 150 kilometres, the Frenchman aims to show the power of the human spirit, while highlighting the beauty of Qatar as a tourism hotspot and encouraging a healthier lifestyle. He'll also attempt to set a new official world record for the fastest run north-to-south in the country on days three to five (at least 190 kilometres from Al Ruwais to Salwa).

Weighing his bag -- which weights 7.5 kilograms overall -- in front of various media outlet representatives, Pierre said that he's very excited to finally start what will be, without a doubt, a memorable experience.

"It's been a lot of work to put everything in place, but I'm so glad to be able to share this moment with people," he added.

At times, Pierre is required to bring an additional 10 kilograms of water, which he'll be sourcing either from farms or local populations he passes, with distances as far as 50 kilometres to travel from one water source to another.

Pierre says he'll not only rely on GPS for directions, but will instead use traditional maps and compass for the entire run. He also emphasized that the sudden change in Qatar's climate this month -- with the winter breeze slowly fading away -- might bring him further obstacles along the way, but said that he's up for any challenge.

"Today will be a bit of a test day. I'm going to take it very easy and finish strong for the rest of the week. I know that the real tough challenge will start on Day Three (Al Ruwais to Zekreet) with the 110 kms that starts the record attempt -- and that's why I'll use the first 2 days to adapt and warm up into it. I will try to take the time to enjoy every minute of it", revealed a pumped-up Pierre.

Leaving for Thakira Port from Katara, Pierre's first day on the road will mostly be sunny. Going north, he'll pass along the road all the way to Al Khor, then north-east to Thakira. His water supply point for the day will be at the Simaisma Woqod Station in Al Khor. Pierre will camp by the shore once he reaches his first destination from the starting point-- Thakira Port.

A Katara spokesperson commented: "Over the coming week, Pierre will see, and the photographers and videographers that cover his efforts will capture, the beauty of Qatar from the dramatic skylines of Doha to the serene beauty of sunrise in the desert. We are so pleased that the first and last sight of this challenge is Katara, the cultural home of Qatar. We can’t wait to welcome Pierre back next Saturday morning and in the coming months host a photo exhibition of images from around Qatar taken during the challenge."

Below is Pierre's complete route for the 'Alone: A Run Around Qatar'

Pierre is undertaking the challenge alone, receiving no assistance from his support team, who will only be capturing key moments of the run to share the challenge with the public.

Expected to finish at 10:30 a.m. on Saturday, February 24, Pierre hopes Qatari runners (young and old) will join him for the final couple of kilometres within the premises of Katara on February 24. The run is supported by MBM Transport, Katara, Aspire Zone, Garmin, Xtork and Pro-TV.

Make sure to snap photographs of Pierre when you spot him running around and use the hashtag #RunAroundQatar once you post on social media. We wish Pierre the best of luck!

Are you as ecstatic as us upon hearing the news of Pierre's Guiness Record-worthy running attempt? Drop us a line in the comments below and don't forget to like and share this article!