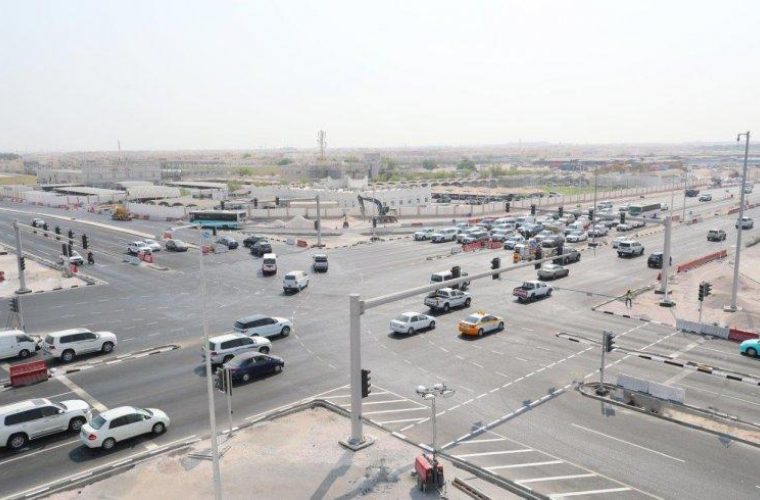 Public Works Authority ‘Ashghal’ has completed the conversion of four signal-controlled intersections and opened them to traffic as part of the upgrade plan of the Wholesale Market Street.

The opening of Wholesale Market Intersection, Al Mashatil Intersection, Wadi Al Ghadeeriyat Street Intersection with Bu Hamour Street and Al Sidr Street coincide with each other in order to achieve great flow of traffic in both densely populated areas of Bu Hamour and Al Waab.

The new openings are part of a plan to develop the Wholesale Market Street, which is gaining economic importance and witnessing traffic congestion.

The upgrade of the Wholesale Market Street project includes the conversion of four roundabouts, increasing the number of lanes at the junctions and constructing service roads along with the main road, which contributes to increasing the traffic capacity thus enhancing both safety and traffic flow.

Project Engineer Abdullah A Nuaimi confirmed that Ashghal was quick to accomplish the conversion of the roundabouts into signal-controlled intersections due to the urgent need for the area. The four intersections are located in a congested area that witnesses heavy traffic due to the surrounding facilities such as the wholesale market and many health centers such as Mesaimeer Health Center as well as different educational facilities. This is in addition to being connected to major roads such as Salwa Road, Wholesale Market Street, Haloul Street, Mesaimeer Road and Al Waab Street.

He explained that these new openings would provide alternatives to the drivers away from the streets where the construction work is taking place.

The wholesale market roundabout, which consists of three lanes, was upgraded into a signal-controlled intersection with seven lanes on the Wholesale Market Street in the north and south directions, including two left turns and one right turn.

The Wholesale Market Intersection will serve many vital facilities, including the Wholesale Market, which attracts thousands of people daily and receives hundreds of trucks, which form a major traffic pressure in the area. The intersection also provides easy access to Thursday/Friday Market and the surrounding residential areas such as Ein Khaled, Bu Hamour and Al Waab.

Al Mashatil roundabout, which intersects with Haloul Street and Al Rihab Street was upgraded into a signal-controlled intersection. Ashghal expanded the number of lanes to three lanes instead of one lane in both directions heading north and south. While the two lanes in both eastern and western directions were upgraded into five lanes instead of two, including two left turns.

Al Sidr Roundabout was upgraded into a signal-controlled intersection, which intersects with Al Sidr Street and Snay Bu Hasa Street. Ashghal has expanded the number of lanes in Al Sidr Intersection to seven lanes heading north and six lanes heading south, including three lanes to turn left. While the number of lanes was increased to six lanes in the eastern and western directions, including 3 lanes turning to the left.

Bu Hamor Roundabout was upgraded into a signal-controlled intersection in which it intersects with Wadi Al Ghadeeriyat Street. Ashghal expanded the number of lanes to four lanes instead of two lanes in the directions heading east and west, with a single lane to the left, while the number of lanes heading north was increased to two lanes instead of one.

The new improvements will increase the intersection’s traffic capacity, which will significantly improve the movement of vehicles in the heart of Al Waab area, which has many educational and health facilities.