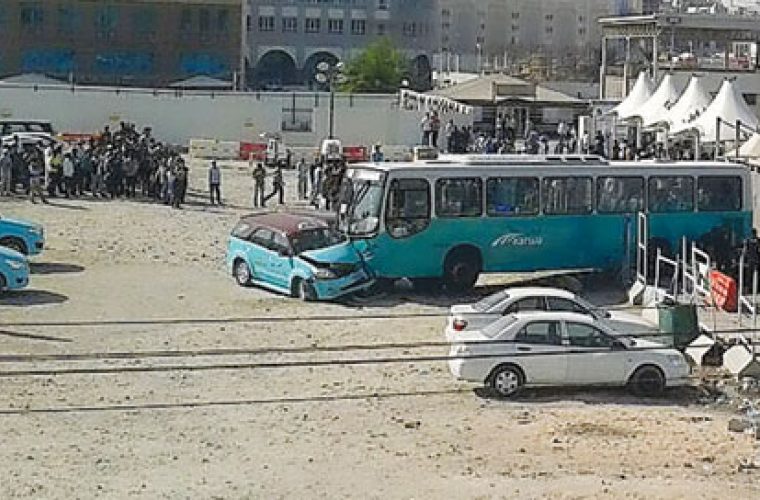 At least four people were killed and two injured early afternoon yesterday in a crash at the busy Al Ghanem main bus station near the Gold Souq.

The condition of the injured could not be ascertained until the time of going to the press.

Two of the deceased were reportedly Filipinos, including a woman, while the others were apparently Indians.

Witnesses said the accident took place around 12.30-12.40pm, when a bus sped past a stand where it was supposed to have stopped, and hit and ran over waiting commuters. It then hit the shed of the stand and two Al Million taxis before coming to a halt.

Three people were said to have been killed on the spot.

It is believed that the driver of the bus (No. 156 for Al Gharrafa) pressed the accelerator instead of applying the brakes, witnesses said.

The mortuary of Hamad General Hospital (HGH) confirmed that it had received four bodies from the bus terminal at around 2.30pm. But sources did not give the nationalities of the deceased. Witnesses said two of them were Filipinos — a man and a woman.

Contacted, the Philippine Ambassador, Crescente R Relacion, said there was no confirmation about the death of Filipinos. “It was reported to me that there was a crash at Al Ghanem bus station at around 1-1.30pm today (yesterday) and some Filipinos could be involved. I need to verify,” he told this daily at around 8.30pm.

According to witnesses, the other two deceased were from the Indian sub-continent. A vernacular newspaper said both were Indians. However, No one was available at the Indian embassy for comment.

The driver, whose nationality could not be ascertained, has been taken into custody for questioning. The bus had arrived from Al Gharrafa suburb and was approaching the stand after dropping the passengers.

Among the casualties were those waiting for the bus that would take them on Al Gharrafa route on its return trip.

Al Ghanem terminal is crowded on Fridays since it is a day off and people throng it in large numbers, but since the crash took place a little after Friday prayers, the rush wasn’t much, witnesses said.

This is the second time a freak accident has taken place in Al Ghanem. One person had died (in hospital) and many were injured in a mishap in August 2013.

Photographs of two bodies stuck under the tyres of the bus in yesterday’s accident went viral on local social media.

A Bangladeshi witness, Kabir, said he had stayed close to the bus station and saw the accident from the rooftop of his building a little after it occurred and that three people died on the spot.

“We could see three bodies wrapped in white clothes lying close to the accident site, while a woman was being carried to an ambulance with an oxygen mask on her face,” he added.

He said he had just returned from Fanar after performing Friday prayers when he saw police vans near the bus station.

Mowasalat, the state-run transport company that owns and runs Karwa buses, did not issue any statement on the mishap.

By 3pm, normalcy returned to the terminal.

A taxi driver who gave his name as Ali Mohamed Kamal said he was a witness to the accident.

“We were in the parking lot of the bus station when we saw a bus rampaging and crushing people and barriers. In fear we fled our taxis,” he said.

A worker from a cafeteria (Green Tea) close to the site of the accident said he was still shaken since one of the deceased had collected tea from him in a plastic cup and as he left he came under the rampaging bus and died. “I will never forget this day. I saw his body lying in a pool of blood and the cup a few metres away.

“The bus missed our cafeteria by a few metres,” he added.

Meanwhile, at its last session on Tuesday, the Central Municipal Council (CMC) discussed the conduct of drivers of public transport buses (Karwa).

The public representative body asked Mowasalat to organise intensive courses to help improve the efficiency of its drivers, their familiarity with roads and locations in Qatar and their English language skills.