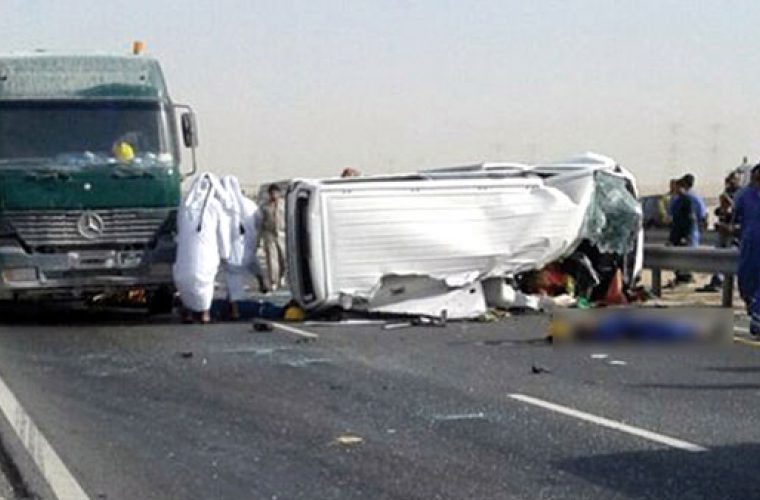 Four Asian expatriate men were killed and at least five others injured after a trailer truck collided with a van near Al Kharara on the Mesaieed -Salwa road yesterday.
The accident occurred at 7.30am when the van carrying workers of a contracting firm was on its way to a work site near the new port under construction between Wakrah and Mesaieed.
Though it is not known how the accident happened, the impact of the collision was so severe that the van was thrown away and all the four workers reportedly died on the spot.
Among the deceased were two Filipinos and two Nepalese who belonged to the Kuwait-headquartered Imco Engineering & Contracting Company. Confirming the death of its workers, a company spokesperson told Gulf Times that some other employees of the company who were also travelling in the van sustained injuries, at least one of them seriously.
According to the Nepal embassy, the Nepalis killed in the accident were Ram Prasad Rajbanshi (45) and Girija Khanal (22).
According to a source, two more Nepali nationals, B K Bhakti and Sani Chamar, were killed in two separate accidents yesterday.
The Philippine embassy gave the names of the Filipino victims as Ysrael Villamarin Cenine (36) and Reynel Anonceivo Manalo (22). Two other Filipinos, Bernard Nacasukit Teuis and Christopher Coliatano Cleofe who sustained injuries in the accident have been discharged from the Wakra Hospital.
Inquiries made at the Wakra Hospital found that it received four bodies from the accident site and six others have been undergoing treatment. Besides a Sri Lankan expatriate, most of the injured are Nepalese and Filipino workers .
Sources at the Indian embassy said no Indian was involved in the accident. Soon after the collision, the injured were ferried to the Wakra Hospital in a helicopter ambulance. Traffic on the road was diverted to the newly-opened truck route to Lusail.
A large number of trucks operating between Doha Industrial Area and the Mesaieed Industrial City (MIC) use the Mesaieed -Salwa route .
Both the Philippine and Nepal embassies were quick to come to the aid of their nationals and the missions also released all related information by yesterday evening.
An official from the Philippines Overseas Labour Office (POLO) visited the Wakra Hospital where the injured had been undergoing treatment.
The labour attache at the Nepal embassy, Lilanath Dahal, also visited the hospital to inquire about the welfare of the injured.