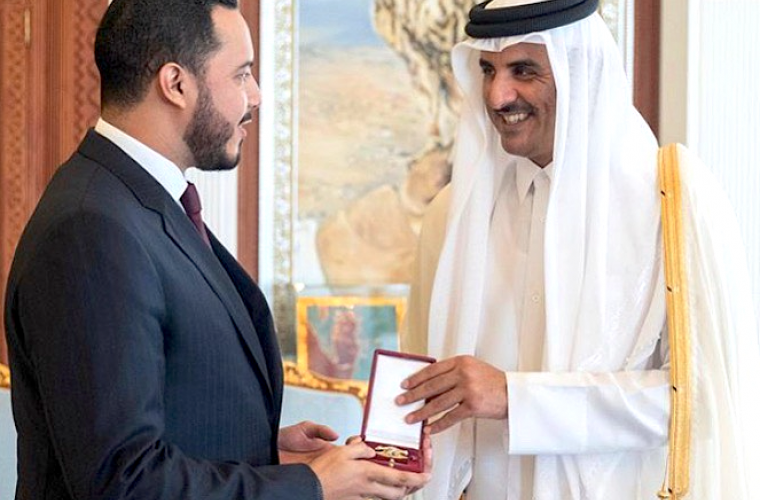 "I beg all of you to continue inspiring people the way you inspired me. This is not the end and this is not a goodbye. See you in Qatar in 2022."

It was a bittersweet goodbye for former Ambassador of Panama to the State of Qatar Oreste Sandoval as he finished his successful endeavour in Qatar just recently. After two years since he first presented his credentials to His Highness the Emir Sheikh Tamim bin Hamad Al Thani on 2017, it's time to go home for him but with a promise of returning to the country, he embraced highly and called his home away from home.

Former Ambassador Oreste Sandoval first arrived in Qatar on 25 May 2017 as the Ambassador of Panama to the State of Qatar, with the mission to handle all the diplomatic relations of his home country Panama with that of the host country, Qatar. From that day onwards, he recalls, time stood still for him and his fascination with Qatar started. Oreste literally fell in love with the country and never looked back again.

The ILQ Team: "What was your first impression of Qatar?"

Oreste: "When I landed for the first time in Doha I was astonished by the landscape view, with the beautiful colour of the sea and with the amazing design of the Hamad International Airport. Qatar has beautiful geographical characteristics, sealine, and mangroves. Needless to say, in Qatar, you can find a kind of beauty that is not common these days in other places. The eyes and smiles of the people show the beautiful kindness of their heart."

To familiarise himself with his new environment, Oreste pledged to completely discover and understand the culture and traditions of Qatar by heart. He started visiting museums and important cultural sites as much as he could. His belief was that knowing the history of the country is the best way to co-exist with it especially now that he was staying in the country.

Oreste: "The culture - from statues in the middle of the Zekreet desert of Richard Serra, the Museum of Islamic Art, the new National Museum of Qatar, till the musical wonders of Qatari musician, Dana Alfardan, which is being showcased all over the world - is exceptional."

But aside from these, Oreste would patiently learn the manner and ways of the Qataris through the friends and new colleagues that he interacted with on a daily basis. He would discover new things every now and then about them and, as the days passed by, he appreciated the people and the country more than anyone could never imagine.

The ILQ Team: "What are the other things you like about Qatar?"

Oreste: "Are you sure you have enough space for this answer? (laughs) Let's try to resume it: in the most essential things, the kindness, as a signature from the hearts of every Qatari. His Highness The Amir Sheikh Tamim bin Hamad Al Thani and the other members of the Al Thani family, every Qatari I have met so far exemplified this trait.The vision that Qatar has for itself and the rest of the world. The strength of the nation to continue growing and overpassing any obstacle, and how Her Highness Sheikha Moza bint Nasser said: “to remain unchained”.

Balance is the key, says Oreste in achieving the perfect combination of heritage and modernity. The government was able to preserve their cultural heritage and traditions superbly while adapting perfectly to the modern needs of a developing country. In other words, Qatar was able to become progressive without sacrificing its historical beginnings, customs and traditions.

Oreste adds the commitment to excellence is what makes Qatar different from other countries. Up to this very date, he would still be amazed at the different innovations and plans of the country in terms of its infrastructure, economic policies and developmental changes that would always leave the whole world in wonder. Qatar, according to him, understands that the best kind of competition is not the one that you make with others, but the one you make against yourself.

The ILQ Team: "Why would you recommend Qatar as a place to live in?"

Oreste: "Considering the geographical location of this country, I consider Qatar to be one of the most important hubs in the world. Living in Qatar gives you access to dozens of countries in different regions, considering, of course, the impeccable support that Qatar Airways, the best airline in the world, provides to the country. If you live in Qatar, you live in the heart of the region."

The ILQ Team: "How did Qatar change your life?"

"Since the first moment I came here, there hasn’t been one day without me learning something new. It is a country that taught me to never stop dreaming and to think big."

It was an overwhelming episode in Oreste's life when, after two years of working and living in Qatar, experiencing its rich cultures and tradition, meeting its friendly people, he decided to wholeheartedly embrace the country by getting married here, the Qatari way.

Maria Fernanda Del Rio Cruz-Arroyo, a Mexican lady, was the lucky bride that captured the heart of Oreste. He met her in Istanbul where she was finishing her MBA in International Finance. They met last April 2018 but lost connection until December last year when their paths crossed again. Oreste went to Instanbul for a short trip and accidentally saw her in the city. By February 2019, he popped the magic question and asked her to marry him and move to Doha.

Oreste: "We got married in April this year in Doha. First, in a civil way on the Helipad of a Hotel owned by out dear friend Sheikh Faisal bin Qasim Al Thani and then in a beautiful place under the organization and support of His Highness and the Ministry of Culture and Sports of Qatar. This is one of the most magical moments in our lives, the opportunity to dress, celebrate and embrace the Qatari culture joined by friends from all over the world.

The ILQ Team: " What made this wedding special and memorable?"

Oreste: "This country opened the doors of its heart to make us feel welcome and blessed by the place where we decided to start our new family, it made me and my wife feel safe and embraced by Qatar."

This year Ambassador Oreste's term ended and it is with a heavy heart he had to say goodbye to the people he had worked with and go home temporarily to his home country Panama. But, probably the most painful thing about all these is leaving behind the country which he considered his second home, Qatar.

The ILQ Team: "How would you describe your feeling now?"

Oreste: "So far, I can say I'm really happy. Allow me to try to answer you with a verse I read one time in the Quran and I felt connected to, “And He has made me blessed wherever I am” (Quran 19.31), and I'm sure He really blessed us bringing us to Qatar."

The ILQ Team: "What's next for you after your work as an Ambassador here?"

Oreste: "There is a word that I learned from the Quran (MAKTUB), and it means that God has a destiny written for all of us. So, we are sure that wherever God places us, we will continue to give the best of us to make proud the people that appreciate us."

The ILQ Team: "What legacy would you want to leave in Qatar?"

Oreste: "No legacy can be as meaningful as leaving a small print in the heart of the people that have trusted and welcomed you."

Life is like a box of chocolates, you never know what you're going to get next. Life is unpredictable in a positive way. You need to be always ready for what it has to offer you and accept new challenges ahead. Did you get inspired by Ambassador Oreste's love for Qatar and how he embraced it wholeheartedly? Tell us what you think in the comments section below, and don’t forget to like and share this article – it keeps us going!