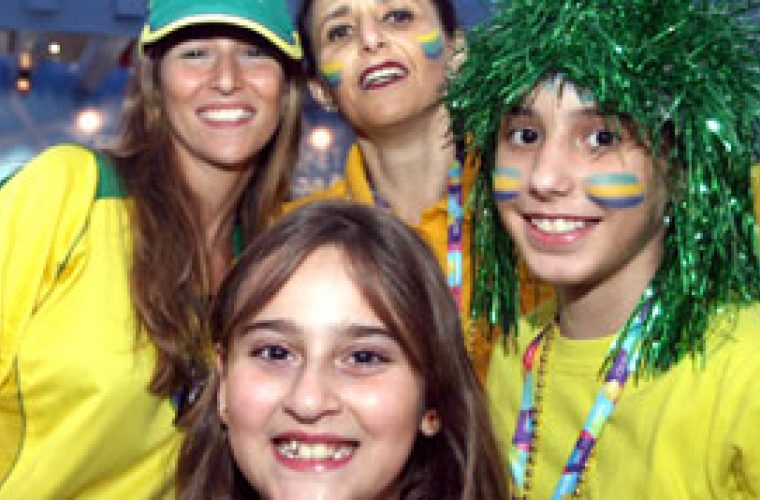 Thousands of football fans turned up at the Aspire Zone outside Khalifa Stadium to visit the Fanzone ahead of last night’s international friendly between England and Brazil. Specially set up to give visitors a flavour of Brazil and England prior to kickoff, the area was full of expectant supporters buying their merchandise and getting their faces painted before cheering on their football heroes. Featuring music, cuisine and merchandise from both countries the area was full of fans of all ages and nationalities, creating a carnival atmosphere throughout the afternoon and the evening. The zone had a number of footballing games for fans to take part in, with beach football games taking place alongside one-on-one keep the ball contests and penalty taking games which measured the accuracy and speed of the shots taken. Fans were also taking part in their own Brazil versus England matches on video games consoles, serving as a warm-up to the real event to take place in the 50,000-seater stadium behind them. They could record their messages of support for the Qatar 2022 bid in a video booth, with the general consensus being that the event had been well organised and a good advert for Qatar hosting sporting events in the future. Visitors took camel rides around the area, and the Arabic section of the Fanzone proved particularly popular with the travelling fans. As one resident English fan said: “It is brilliant to see that all the visitors are finding the local traditions so fascinating - they seem to be really interested in everything going on.” Another England fan said: “This is a fantastic experience and a cultural melting pot. You wouldn’t get something like this in England, and it is a really family-friendly atmosphere down here – it’s a terrific build-up to what should hopefully be a great match.” With three hours to go before kickoff, the atmosphere around the stadium was electric, with the population of Qatar embracing the chance to see two of the traditional giants of international football in their home city. http://gulf-times.com/site/topics/article.asp?cu_no=2&item_no=326271&version=1&template_id=36&parent_id=16