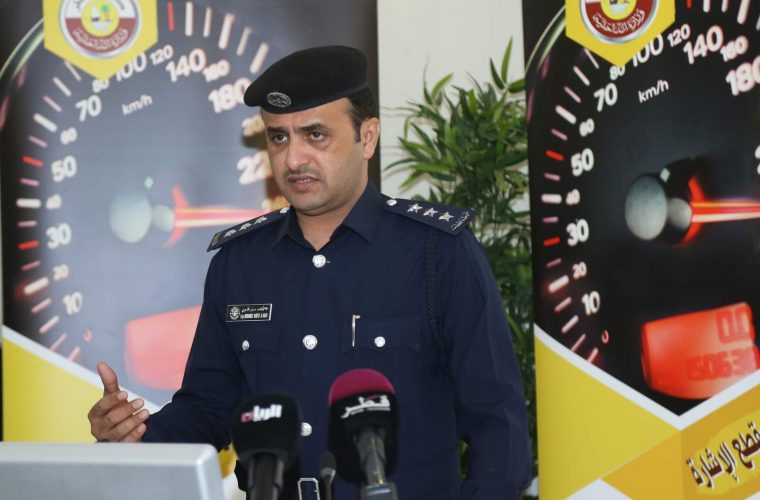 As part of the ongoing traffic awareness campaign under the title “Accident-free Summer” the General Directorate of Traffic held a press conference today morning to announce the activities around the fifth week’s focus. The campaign will highlight this week the violations of crossing red signal and over speeding, which are considered among the most common reasons of road accidents that cause loss of many lives and properties.

The General Directorate of Traffic calls upon the road users to beware of committing these violations and requested all media, to cooperate in educating the public on these violations, to ensure the safety of the people and the security of the country.

Col. Mohammad Radhi Al-Hajri, Director of the Awareness and Information Department at the General Directorate of Traffic told that the violations of crossing of the red signal will be subject to a fine of 6000 Qatari riyals and 7 points, stressing that the ultimate goal of the General Directorate of Traffic is to ensure safety, and what is relied on it is to prevent the offenders who don’t obey the law, through a fine commensurate with the seriousness of the violation, and the consequent serious accidents.

Col. Mohammad Radhi Al-Hajri, underscored the significance and the importance of respecting law through adhering to the road signals.

The head of traffic planning section at the Roads Engineering Department, Captain Mohammed Misfer Al-Hajri, stated that the statistics for the first and second quarters of the current year showed an increase in the number of violations due to over speed with 51,000 violations and 6700 violations of signal crossing.

Speaking to the media he added that all traffic signals in the country are smart signals, acting through the "sensor", that respond to the traffic condition in the signal, while there are specific times that take into account the capacity of the road and the rate of flow of cars on it.

Chapter No. 9 of the traffic law says that “Traffic priority at junctions with automatic traffic light signals shall be in accordance with the following colours: 1. Red for stop. 2. Yellow for readiness, but it does not mean move. 3. Green means move.

Motorists shall undertake to observe automatic traffic signals while driving. Despite having priority or if the traffic light indicates green, a motorist may not move the vehicle if such act will disrupt or hinder traffic, and whoever has priority may waive such priority if traffic conditions so require. In the event that a traffic police officer is directing traffic using hand signals, motorists shall comply with those signals and not others, and all other traffic signals shall be invalid.

On the directions related to the pedestrians the article no. (62) of the Traffic Law stipulates that when crossing the carriageway on a designated path, pedestrians shall observe the following:

1. Pedestrian traffic lights if available. 2. No crossing as long as traffic police are instructing vehicles to pass.

A fine of 500 Qatari riyals will be charged if the pedestrian did not follow the traffic lights of the pedestrian path or the manual signal of the policeman. In all cases, pedestrians must observe and take account of traffic signals and rules.

Regarding the over speeding the Article 53 of the Law states that motor vehicle drivers shall abide by the following:

1. Not exceed the maximum speed limit for motor vehicles on the road. , Drivers of police vehicles, and ambulances and fire-fighters responding to an emergency are exempted, as is any driver of a vehicle transporting patients or seriously injured persons provided they use an alarm and hazard lights and slow down as much as possible for the safety of traffic at junctions.

2. Reduce speed when approaching pedestrian crossings and residential areas, turnings, bends and ramps, and junctions, roundabouts, bridges and tunnels, and when entering public squares, or approaching schools and hospitals, to ensure road safety.

Cover image courtesy of The General Directorate of Traffic