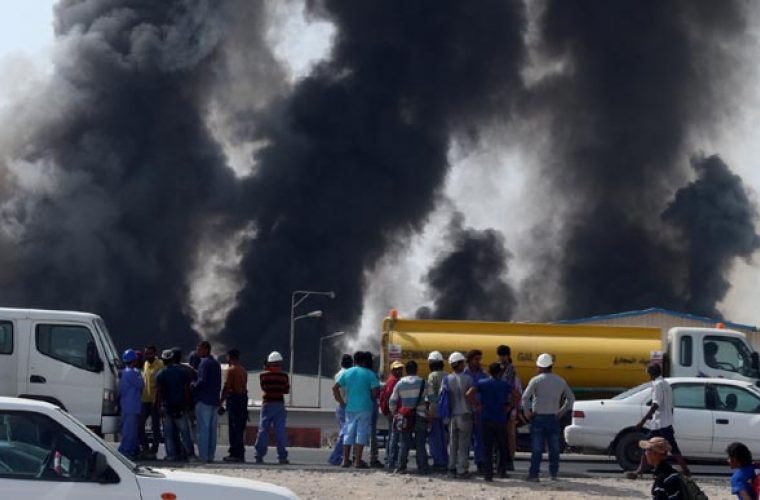 A major fire that ripped through about half a dozen labour camps in Sailiyah on Thursday caused extensive damage to a number of accommodation units, rendering hundreds of workers homeless.
The blaze also damaged some warehouses in the vicinity.
However, no one was injured in the fire that was first sighted around 1.15pm by workers in one of the camps. Several workers were reportedly resting in their rooms when the fire broke out due to the midday ban on outdoor work from 11.30am-3pm, sources said.
Though the cause of the fire is not known, some workers said it could have originated from the generators that supplied power to the portacabins that housed workers of about a dozen contracting companies, most of them working in the infrastructural projects in the area.
The affected workers told this newspaper the fire had rendered many of them homeless and their employers were looking for alternative accommodation in labour camps in the Industrial Area.
On receiving information, personnel from the General Directorate of Civil Defence rushed to the area to help containe the blaze. Several units of firefighters, fire engines and water tankers were deployed while many emergency vehicles and ambulances also rushed to the site.
Inquiries found several workers lost their belongings while some were fortunate to be able to carry away their possessions. It was also not known how many workers lost vital documents such as passports, which many of them were believed to have kept in their accommodations.
A group of workers said they were able to flee to safety after they heard some of their neighbours screaming about the fire.
Following the fire, some of the workers were seen taking shelter under the trailers parked in the open ground near the area in an apparent bid to protect themselves from the blistering sun.
The losses suffered by the warehouse owners is being assessed.
The area has witnessed no less than 10 major fires in the last one year and many other smaller fires too, causing severe damage to warehouses and accommodations.
There have been reports of excess electrical load to many camps. During the four-month period starting from June, power consumption is usually at its peak because of the large number of air-conditioners working non-stop to cool the rooms. It is generally believed the latest fire was owing to the distribution system being overloaded because of the huge power demand.