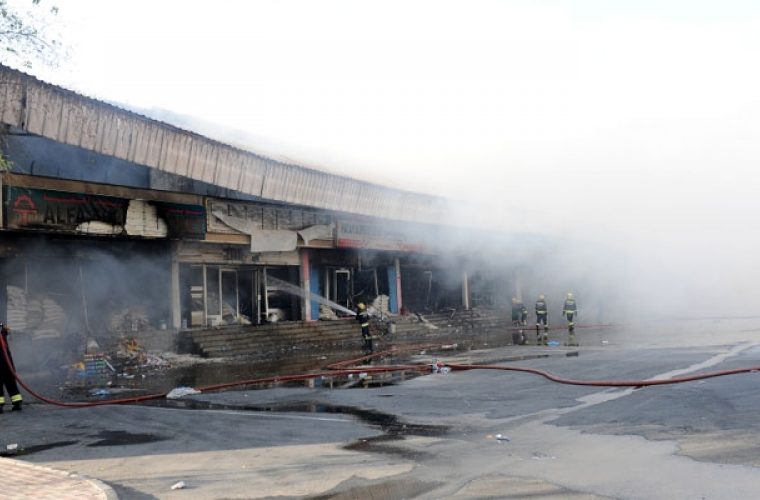 Fires broke out in different parts of Doha on Sunday, with one of them destroying several shops selling foodstuff in the Central Market, Abu Hamour.
There were no reports of any injuries in any of the four incidents, the biggest of which took place at the Kilo Market on the Central Market premises. Three other fires were reported from a wastewater treatment plant near E-Ring Road, a warehouse of a food company in the Industrial Area and a residential compound in Al Hilal.
The blaze at Kilo Market was reported in the afternoon. Being a holiday, the place did not have too many visitors.
Soon after the fire started, police cordoned off the area and Civil Defence personnel rushed to the spot . Several fire engines from Al Thumama, Aziziya and Wadi Al Sail and water tankers were deployed for the firefighting operations, which continued for a few hours.
Plumes of smoke could be seen rising from the affected portion even from distant places. While the flames had been doused, some smoke was still visible after sunset.
Later in the evening, the Ministry of Interior said in a statement on Twitter that the Civil Defence managed to control the fire that broke out in some shops at the Central Market. There were no injuries, it confirmed.
While the cause of the blaze was yet to be determined, some visitors said the temperature was “very high” when the fire broke out.
The fire caused extensive losses to the operators of several establishments at the market. Most of the destroyed shops belonged to long-time traders, who supply foodstuff to local shops and had been operating from the complex for years.
The firefighters were able to prevent the flames from spreading to the neighbourhood. The premises also host several shops of vegetable wholesalers and suppliers of dry fruits. No damage was reportedly caused to any of these outlets.
Meanwhile, a fire was reported from a wastewater treatment plant off E-Ring Road, close to the Medical Commission signal in the Al Thumama area. The fire was brought under control shortly after it broke out and no major damage was caused, according to sources.
There were also reports of a fire at a warehouse of a foodstuff distribution firm in the Industrial Area in the early hours of the day.
A fire was also reported from a residential compound near Mamoura Complex in Al Hilal. This, too, was brought under control quickly.